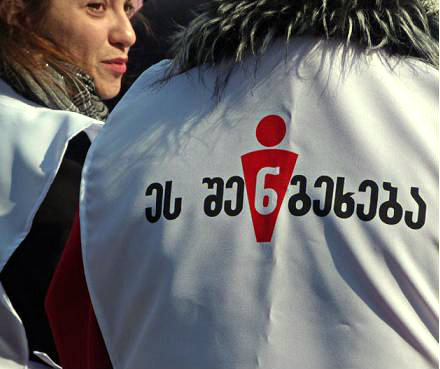 The campaign ‘This Affects You Too’ suspects that the government wants to delay a law to protect against illegal surveillance. (DF Watch.)

TBILISI, DFWatch–Campaigners fighting to stop secret surveillance in Georgia are asking parliament to pass amendments to prohibit secret phone surveillance before the local election on June 15.

Non-governmental organizations in the ‘This Affects You Too’ campaign on Tuesday asked parliament and the government to adopt the amendments soon, because parliament won’t hold plenary sessions the last month before the election.

After ten months of consultations, a bill was introduced to parliament’s judiciary committee, after a process that included NGOs, international experts and the Interior Ministry.

In a statement, ‘This Affects You Too’ says the process to pass the bill was delayed because an inter-agency commission was tasked with working on the bill, staffed by Interior Ministry, Justice Ministry and Chief Prosecutor representatives.

“There is a suspicion that the executive government, specifically law enforcement bodies, are deliberately attempting to interrupt the legislative discussion process,” the statement reads.

The campaigners call on parliament to resume the review of the draft bill.

They write that it is important to adopt the bill before the election, as it provides protection of the right to privacy and will bring legislation closer to international standards.

‘This Affects You Too’ unites a number of local influential non-governmental organizations. It was started in 2011 before the parliamentary election and was recently resumed as according to campaigners the new government should destroy an archive of secret surveillance amassed during the previous government and improve legislation to protect against such surveillance in the future.