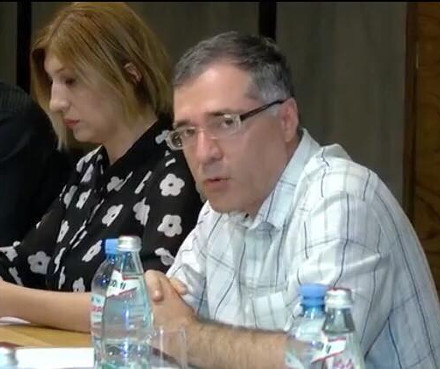 DFWatch Editor-in-Chief Lasha Tughushi is one of the authors of the bill. Behind him, co-author Natia Kuprashvili.

TBILISI, DFWatch–Georgia’s largest NGO coalition proposes an overhaul of the existing system for selecting a chief prosecutor in order to minimize the risk that one party takes the decision unilaterally.

The proposed bill comes in the wake of a two-week-long series of rallies in Tbilisi in early June, which were sparked by a suspicion that the Prosecutors’ Office was protecting the murderers of two high school boys. The chief prosecutor eventually resigned, which left his position vacant.

“If the existing malfunctioning system is used to elect the Prosecutor General, he or she will not be able to properly carry out their duties, fulfill societal expectations and restore trust in the institution,” reads a statement by Georgian National Platform (GNP) of Eastern Partnership Civil Society Forum (CSF), which is a coalition of over 180 local NGOs.

The GNP supports a bill prepared by several of its member organizations, which will ‘completely depoliticize’ the Prosecutorial Council; a body responsible for electing and dismissing a Chief Prosecutor. The title of the highest ranking prosecutor will be changed to Prosecutor General this fall, as the next president is sworn in.

According to the bill, the selection of a chief prosecutor must be handled by the reformed Prosecutorial Council. The persons who hold political positions, MPs and the Minister of Justice, cannot be members of the council. Furthermore, the government can not participate in the selection process.

The authors of the bill are GNP incumbent and former chairs, Natia Kuprashvili and Lasha Tughushi, respectively; Zviad Koridze, who is a chair of the pardon commission and Alexandre Tskitishvili, the head of NGO Human Rights Center. Vakhtang Khmaladze, former MP and renowned legal expert contributed as a consultant. Lasha Tughushi is also the editor-in-chief of DFWatch.