New South Ossetian leader to seek a union with Russia

New South Ossetian leader to seek a union with Russia 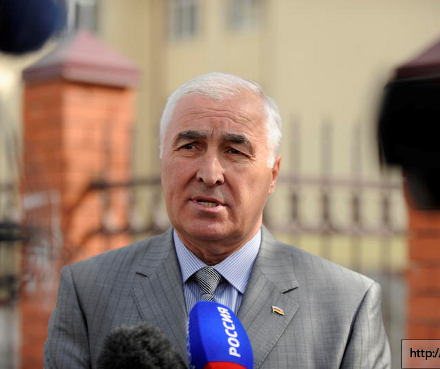 Newly elected leader Leonid Tibilov says he will continue the course towards a union between North and South Ossetia. (RES.)

TBILISI, DFWatch – The newly elected leader of South Ossetia, a former local KGB head, promises to continue the course of closer relations with Russia, on a course towards uniting South and North Ossetia.

South Ossetia, or the Tskhinvali region, which was occupied by Russia following the war in 2008, have tried to elect president for almost half a year; from November, 2011 to April, 8.

With 54 per cent of the votes, Leonid Tibilov, who was local KGB head in the 1990s, defeated Human Rights Commissioner David Sanakoyev.

“With Russia, we will continue the course that was chosen by our people – further integration with Russia in all spheres, which are available – this is economy, and military-technical component, and defense. South Ossetia has always been and will be a true partner on the southern borders of the Russian Federation,” Tibilov told Ria Novosti after the results of the elections were clear.

The de facto president will be inaugurated on April 19.

In the four elections held the last half year, two Kremlin favorites have been defeated: Anatoly Bibilov and Dmitry Medoyev.

Dzhioyeva has tried to defend her victory for a period, called off her protest for a few weeks, then took it up again and planned to be inaugurated in February. But the day before, she was attacked by militia and she ended up in hospital for weeks. Only a short time before the second election was she let out. She didn’t vote.

A few days ago, Dzhioyeva set up a new party promising to participate in the parliamentary elections.

Yesterday, she said that even though she considers Tibilov illegally elected, she is happy that everything is over.

“…Because it is the disunity of the people that I saw during those six months, to be honest, severely traumatized my soul. Thank God that a president is elected, yes, illegitimately, but I’ll still be on my old point of view on the decision of the Supreme Court of South Ossetia and regulations of the parliament.”

Yesterday, the new de facto president said that the potential of Dzhioeva must necessarily be used, but he didn’t specify whether he is going to propose any official position to her.