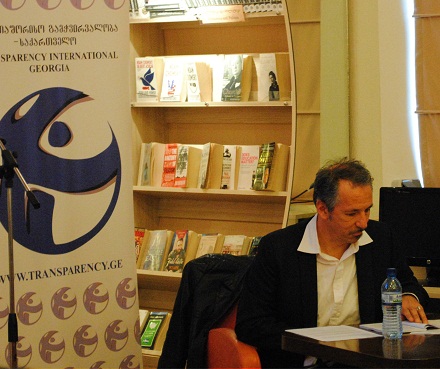 TBILISI, DFWatch–After the election for parliament last year, the process of changing and reallocation ownership has begun, says journalist Paul Rimple, who has published a new book called Who Owned Georgia.

In it, he vividly depicts the very sophisticated quasi-legal system of ownership of the most valuable and profitable assets in this Caucasus republic.

The book started as a proposal from Transparency International Georgia (TI). The non-governmental organization suggested that he could write a book about ownership issues in Georgia.

Head of TI Georgia, Eka Gigauri, said the aim of the project was to try and show who owned and controlled significant shares in important sectors of the Georgian economy and their ties with members of the former government.

“I had a lot of quite important but boring information,” said the author, “and I decided to write it like a novel and make it easily readable. I began with a situation at the shop, when I bought Georgian chocolate, Barambo, and my friend said it was Kezerashvili’s chocolate.”

Rimple thinks that the rate of transparency has improved during last 10 years, but it’s invisible, because of some very obscure issues.

One of these issues is the ownership of TV, oil companies and mobile communication operators.

“After the Rose Revolution in 2003 Rustavi 2 became the government’s PR channel. The main source of information for 89% of residents of Georgia is TV. In case the owners of TV companies have friendship with the government, it’s logical to suspect if their information is honest,” said Rimple at the book presentation.

The book evidences how national broadcasters in Georgia were owned, via a complicated web of companies registered offshore, by former members of the government and their relatives and that the Georgian National Communications Commission (GNCC), the sector regulator, gave preference to those shareholding companies by creating artificial barriers in the broadcasting and telecommunications market.

“Prices often change and it’s normal, but in Georgia it has never come down,” said Rimple.

Gulf, one of the largest companies operating in the oil import and distribution sector was owned by former Defense Minister David Kezerashvili. Another large oil company Wissol, had official information about import capacity of oil that did not match what they had registered, but nobody investigated this discrepancy.

“When we began working on the book, its name was in present tense, but then when unexpectedly Georgian Dream won the elections the process of changing and reallocation ownership began, so we changed the name into Who Owned Georgia (2003-2012),” said Rimple about the name of his book.