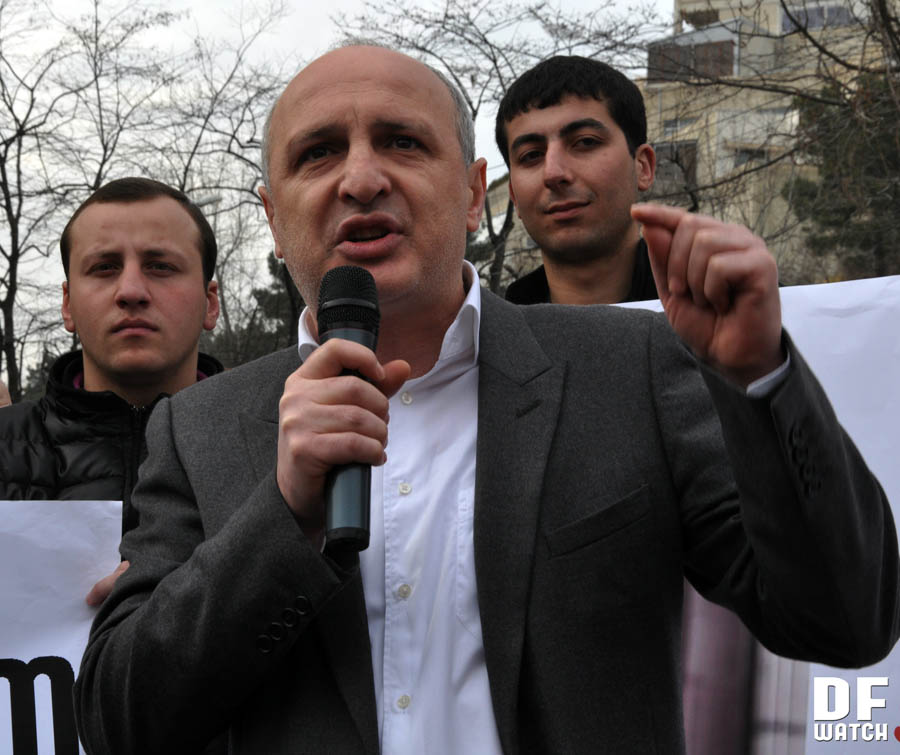 TBILISI, DFWatch–Tbilisi Mayor Gigi Ugulava was charged with money laundering and embezzlement of the city’s money, but not detained.

Politicians from the United National Movement party of President Mikheil Saakashvili on Friday hastily left parliament Kutaisi and headed for Tbilisi after the investigation service of the Ministy of Finance issued a statement accusing him for abuse of public funds.

After leaving the office of the investigative service on Saturday, Ugulava said he ‘cannot understand what the charges are for’, but he was given ‘some papers’ which he would read later.

His supporters and members of the UNM had gathered outside the investigative service half an hour before the mayor appeared. Among participants there were leaders of the UNM and former government officials, including Giga Bokeria, Secretary of the Security Council, Vano Merabishvili, Secretary General of the UNM party, MP Goka Gabashvili and others.

Tens of police cars and policemen were posted at the entrance to the building, and in nearby streets, to avoid any incidents.

Ugulava’s lawyer Gogita Gabaidze told journalists that during the questioning his client used his right to remain silent.

Giga Bokeria, Secretary of the Security council, who was present at the gathering of solidarity to Ugulava said that Bidzina Ivanishvili, the Prime Minister, has a ‘declared goal’ of destroying the opposition.

“Mr Ivanishvili thinks in short-term perspectives and today he tries to destroy the opposition,” he said, adding that this is a very dangerous process, but he is sure that ‘this goal can never become true.’

This is the third time parliament members from the UNM have left their work in parliament and gone to the capital to protest against ‘political persecution.’

The MPs claim that the government is continuing its ‘political terror.’ They didn’t specify when they will return to parliament, but in the past their protests have tended to last about a week.

First time they left Kutaisi was after the detention of Bacho Akahalaia, a former defense minister.