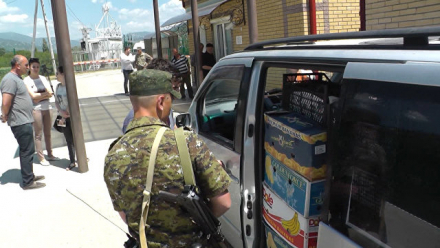 AKHALGORI, DFWatch–South Ossetia has postponed for a month the coming into force of a new regulation which makes it harder for Akhalgori residents to cross the de facto border.

On December 26, Tskhinvali adopted a new regulation which makes it much harder to cross the de facto border between Akhalgori and Georgia proper.

The regulation was set to come into force from January 1, and would severely impact the ethnic Georgians who make up the brunt of the area’s population and depend on being able to travel through the chechpoint for their livelihood.

Currently, locals need either a South Ossetian ‘passport’, or a special pass, in order to be allowed through  the checkpoint, but new regulations imply that every time a person is crossing the administrative borderline, they must obtain a special permit which in practice will be a significant obstacle.

The decision to make the rules effective from  February 1 instead of January 1 might be related to the immense resentment the new regulation has caused among locals, Tamar Mearakishvili, an Akhalgori civic activist, told Ekho Kavkaza.

“The people’s reaction was strong. They used to say: ‘The authorities have only to say: Leave here! Everything goes to this’,” she said.

South Ossetia will be holding elections for de facto president this summer. Locals hope this might make Tskhinvali more attentive to their problems to garner more votes.

Even in Tskhinvali many oppose the travel restrictions, Mearakishvili says.