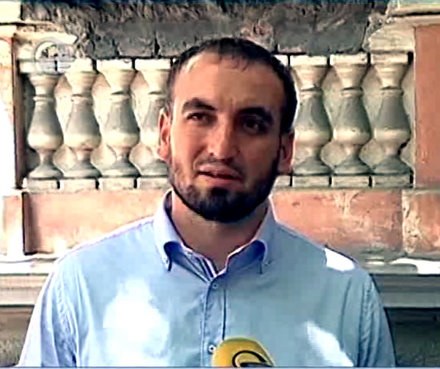 TBILISI, DFWatch–A Chechen refugee continues to claim that he is being harassed by government bodies and that he is not allowed to cross the Georgian border.

Non-governmental organizations and the Ombudsman appeal to the Ministry of Internal Affairs to stop violating hisrights.

Saikhan Muzayev, an ethnic Chechen, has complained against the ministry in court for preventing him from leaving the country more than dozen times. He demands compensation for damages. But the first hearing, which was scheduled for June 12, was postponed because a ministry representative was absent.

Another hearing failed to be held on June 27, and the same reason was the  same, that an Interior Ministry representative failed to show up. The hearing is now planned for August 4.

Chechens in Georgia, mostly living in Duisi and other villages of the Pankisi Gorge close to the Georgia-Russia border, claim that their rights are still being restricted as many of them are prevented from leaving the country, without any explanation.

On February 22, people in Duisi held a first protest rally about this issue claiming that the government doesn’t let Kists and Chechens, mostly youth, from the village leave Georgia and that the government has made a so-called ‘red list’ of people who aren’t allowed to leave.

DF Watch previously reported on the case of Saikhan Muzayev, a Chechen refugee who received Georgian citizenship and was refused to leave Georgia more than ten times. https://dfwatch.net/naturalized-chechen-refugee-not-allowed-to-leave-georgia-69539 Muzayev last tried to leave the country on May 15 but was stopped at the border.

In August, 2013, Phiruz Tsulukidze, an ethnic Goergian from Adjaras and a sportsman, also wasn’t allowed to leave to participate in the European wrestling championship. Tsulukidze, a Muslim, has said a number of times that he is discriminated because of his religion. Later on September 13 he was detained in Batumi during an operation to detain Chechen Yusuf Lakayev. https://dfwatch.net/russian-given-12-years-for-batumi-shooting-74064

EMC spoke with people in Duisi who claim that the situation hasn’t changed. They are still being refused to leave the country without any explanation. The organization has tried many times to get an explanation from the Interior Ministry for why these people were denied leaving the country, but the ministry never responded.

May 6, 2014, the Public Defender also appealed to the Interior Ministry to stop restricting rights guaranteed by the constitution, but also his appeal went unanswered. https://dfwatch.net/naturalized-chechen-refugee-not-allowed-to-leave-georgia-69539

Under Georgian legislation there are only two reasons to deny a citizen to leave the country: if they are wanted or if they present fake or expired identification documents.

In the cases studied by the ombudsman and EMC, no such violations were observed, but it remains unknown why the government doesn’t let them leave the country.

The organization recommends that the government explains officially why Muslims aren’t allowed to leave the country.

On Monday Georgian Young Lawyers’ Association (GYLA) called on the Ministry of Internal Affairs to stop restricting Muzayev’s freedom of movement. GYLA is representing Muzayev in the court appeal.

According to GYLA, their client has been prevented from leaving the country 13 times since January 13. He wants to go to London to study. He has never gotten an explanation as to why the ministry doesn’t let him leave.

Muzayev himself thinks it is related to the Lapankuri operation, which was carried out in August 2012 under the previous government. The new government started to investigate what happened in the operation and Muzayev claims law enforcement bodies are forcing him to give false testimony against former Interior Ministry officials about this case, but he says he has no connection or any information about the Lapankuri operation.

GYLA contacted the Interior Ministry’s counter-intelligence department about the case, which responded that they do not have information about the factual or legal conditions for why Muzayev is restricted from leaving the country.

DF Watch tried several days to get an official comment from the ministry about Muzayev’s case, but press office employees avoided answering our questions.

On Monday, Imedi TV quoted an Interior Ministry representative who said that the ministry is acting within the law in the Muzayev case and that his claims about being forced to give false testimony are ‘absurd.’