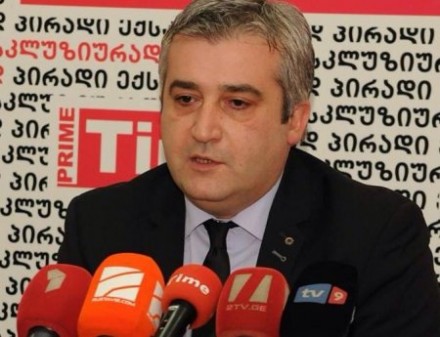 TBILISI, DFWatch–An activist for the National Movement claims that several officials at the Rustavi City Hall, including the deputy mayor, insulted and beat him Monday night.

Mamuka Chikovani, head of the UNM’s branch in Rustavi, told DFWatch that among the attackers were Levan Oniani, head of City Hall’s military registration and conscription service, Levan Kupatadze, head of the supervisory service, Zaza Jaiani, advisor to the mayor, also members of Rustavi City Council Mamuka Mikautadze, who chairs the finance-budget committee and Merab Sulaberidze, head of the Georgian Dream coalition faction.

Chikovani explained that Mamuka Abuladze, the victim, has his own bar, but the alleged attackers rarely went to that bar. They never had a conflict either. However on April 25 they showed up in the bar and drank.

“It seems they were drunk and insulted our activist Mamuka Abuladze, scolded him and then beat him. He has facial injuries and stiches on his lips,” Chikovani told us.

He doesn’t know if the attackers were questioned or tested for blood alcohol levels.

“We were told that due to the interests of the investigation, they wouldn’t provide us with the case details.”

Tamar Akubardia, press spokesperson for Rustavi City Hall, called incident ‘a conscious provocation.’ She told us it was a result of Abuladze’s verbal insult against the City Hall employees.

“This was a conflict between two parties, which was a result of Mamuka Abuladze’s deliberate provocation, after which he invited the press and accused everyone whose names he could remember from the local government,” she said.

An investigation has been launched for violation of article 125 of the Criminal Code, about battery; a violation which in case it results in injuries may be punished by a fine, from 120 to 180 hours of community work or up to 15 months of corrective labor.