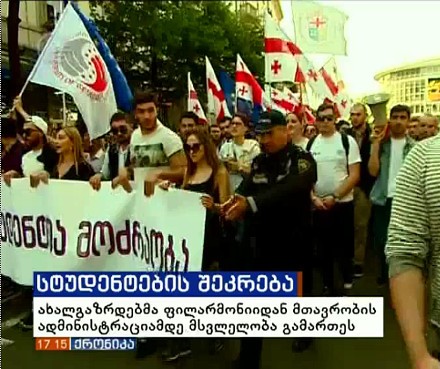 TBILISI, DFWatch–Groups from different universities in Georgia demonstrated in the streets of Tbilisi on Tuesday, mainly demanding education reform, but local media wrote that many of the students didn’t know what the goal of the event was.

The demonstration took place a day after students from the Auditorium 115 movement at Tbilisi State University (TSU) held a demonstration demanding that law enforcement bodies must stop threatening their families. Auditorium 115’s rally was smaller, maybe up to 150 people, while Tuesday’s demonstration mobilized over a thousand young people who held flags of Georgia and the European Union.

The event was planned on Facebook by a group called Independent Student’s Movement. Tamar Nadareishvili, who said she was the organizer, told journalists that their demand is that every university must be involved in the process of education reform

Abolishing the student’s union system was and remains one of the most important demands by Auditorium 115 and the students at Georgian Technical University. They believe that the student’s unions are abusing their powers and misspending money from the university’s budget, mainly using it for leisure events for themselves and their supporters.

Some of the journalists quoted students from India who are enrolled at the Medical University, who said that they came because of calls by the student’s union and they came to protest against the calls for changes to the system of student’s unions in Georgia.

“We were told that the financing of the student’s union may be reduced and other changes may happen at the university, which is why we came,” Imedi TV quoted the Indian students saying.

Organizers left a letter at the government office where they asked them to get involved in the reform process. They believe that the students are not represented only by Auditorium 115, as there are many other groups of students in Georgia.

Tamar Nadareishvili said the reason why some of the demonstrators may not know why they are demonstrating is that the movement was created recently and many of the students came because they saw the event on Facebook.

“But everything was explained there and I don’t know why they are not making comments to the media,” she said.