Mystery: Why is the water level so low in Mtkvari (Kura)?

Mystery: Why is the water level so low in Mtkvari (Kura)? 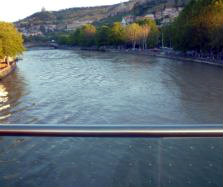 The Mtkvari originates in Turkey, runs eastward across Georgia and Azerbaijan, emptying into the Caspian Sea.

The last few days, water level has dropped in the Aspindza region, close to the Georgia-Turkish border.

The Turkish Ministry of Forestry and Water Resources claims that the reduced level of the Mtkvari is caused by the filling of a dam a few tens of kilometers from the border with Georgia. The dam is being filled up in preparation for winter.

But according to unconfirmed reports, there is a power station under construction in Turkey close to border with Georgia, and that’s why the bed of river Mtkvari may change. Turkish and Georgian governments categorically deny this.

Media in Azerbaijan first reported about the planned power station two years ago, and wrote that it might lead to an ecological catastrophe. If it is true that a power station is under construction, ecological experts say it might also threaten Tbilisi, because Mtkvari has great importance for the city in terms of cleaning and ventilation. In addition, Tbilisi’s sewage is carried away by the river.

Turkey now plans to sign a memorandum with Georgia, but representatives of the Environment Ministry of Georgia told DF Watch that no conditions or dates of signature about the memorandum are known so far. It is also unknown if there will be any sanctions for the Turkish company because it didn’t give the Turkish government prior warning about the reduced water level.

“Turkey has sent a letter about signing the memorandum from Turkey. We don’t have any additional information so far. This is a future plan,” a ministry spokesperson told us.

“Laboratory tests will be carried out, and the results will be made public. In about two weeks, the level of the Mtkvari will be the same as it is naturally,” the ministry representatives explain.

The Mtkvari runs from Turkey to Azerbaijan, emptying into the Caspian Sea. It also passes through Armenia, Georgia and Iran. Its surface area is 188,000 square kilometers. 400km of the 1,515km long river runs through Georgia. The longest section is in Azerbaijan – 906km. Several power stations are constructed on the river.