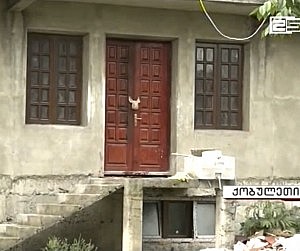 Neighbors of the madrasa placed a pig’s head on the door. (TV 25.)

TBILISI, DFWatch–In Batumi, the City Court on Monday ruled partly in favor of the Muslim community in a conflict about a planned religious boarding school called a madrasa.

The court case, which has lasted two years, deals with a conflict among locals in the town Kobuleti, in western Georgia, which began in 2014.

When it became know that a madrasa was being planned, locals protested against it. Some of them slaughtered a pig and hung its head on the door of the building.

The court decided that this was discrimination and symbolically fined three people one lari each who will be prohibited from interfering in the Muslim community while they are on their own property.

But the court didn’t agree about a claim that the police improperly carried out their duties.

Locals in Kobuleti don’t agree with the court’s decision. They claim that their rights were violated, not the Muslims’ rights.

Zhuzhuna Kaladze, one of the three who got a one lari fine by the court, claims its a district where everybody is Orthodox Christian and praying.

“Our rights are violated when they build a madrasa there,” she told journalists, adding that ‘something serious’ might happen if the madrasa is built.

The Muslim community, on the other hand, does not agree with the part of the court’s decision about the police and plan to appeal the the Supreme Court.

Lawyers representing the community claim it’s the first lawsuit in Georgia where Muslims have claimed to have been discriminated against.

The madrasa in Kobuleti will soon start preparations to open, its director Ramaz Kakaladze said.

“It is very important for us that the court created a precedent to admit discrimination of the Muslim community in Georgia,” he said.