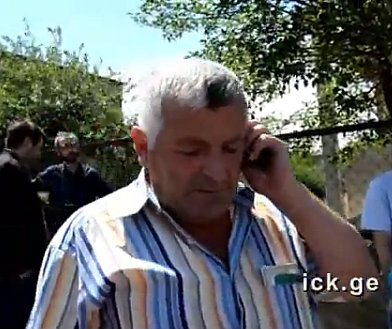 TBILISI, DFWatch–In a village in east Georgia, a prominent Muslim has left because of the religious conflict that has been developing over the last month.

Now Hajji Suliko Khozrevanidze, a leading figure in the Muslim community in Samtatskaro in the Kakheti region, has left his home after too many threats against himself and his family.

“I got ill from being nervous all the time,” Khozrevanidze told the news service Information Center of Kakheti (ICK).

The Orthodox Christians in the village are opposed to a recently opened prayer house, to be used for Friday prayers.

June 7, they prevented the Muslim community there from conducting Friday prayer, as 200 people gathered outside the prayer house, blocking the entrance.

A month later, the conflict still continues, despite intervention by the public defender and the minister for reintegration. Khozrevanidze says there were numerous threats from local Christians, who demand that they not pray. The last two Fridays, the prayers themselves went without incident, with the presence of police and government members, but last Friday, the locals didn’t attend because of threats. Only Muslims from other regions came. The Friday before that, Khozrevanidze’s wife was beaten after the prayer.

Khozrevanidze told ICK that he left because he doesn’t feel well after the threats against his family, and decided to visit his son in the Adjara region next to the Black Sea, and get medical treatment and wait until the situation in Samtatskaro ‘calms down a bit’.

He added that his family are staying behind in Samtatskharo. “My children also won’t go praying.”

The public defender wrote in a statement earlier that the Muslims in Samtatskharo are eco-migrants from Adjara, a partly Muslim region of Georgia which suffers under a severe risk of landslides. They have been able to practice Muslim rituals without problem since they arrived in 1978, but when they recently purchased a house in order to have a place to gather and pray, local Orthodox Christians were opposed to the idea.