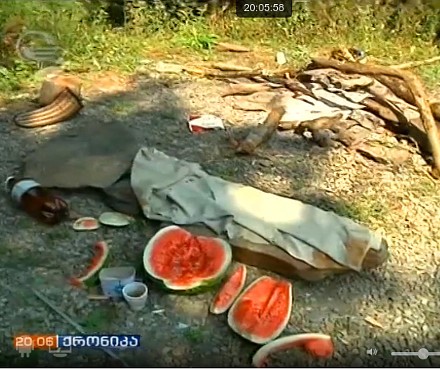 The scene of the murder bore signs of a recent picnic when Imedi’s reporter visited. (Imedi.)

TBILISI, DFWatch–Witnesses in the village where a U.S. citizen was stabbed to death Thursday night reported seeing the tourist in an argument with the suspected murderer two hours before his body was found.

The motive for the murder is still unknown, but Imedi TV interviewed Gia Abramishvili, a local in the village Pshavela, who said that the tourist had an argument with the 20-year-old suspect on the road near the village Sviana, at a place often used for picnics.

“The young man used a knife, slitting his throat, which killed the American tourist,” he said.

The murdered tourist was allegedly heading to Tusheti, a picturesque and remote region in the Caucasus mountains.

Locals also told Imedi that the murder victim was traveling with a companion. It is unknown where this companion is now, Petviashvili told Imedi’s reporter Kakha Kupatadze.

The Ministry of Internal Affairs published a video of the arrest of a 20-year-old man who is accused of the murder. He has admitted guilt and now faces up to 15 years in prison. Police also seized a knife that is believed to be the murder weapon.