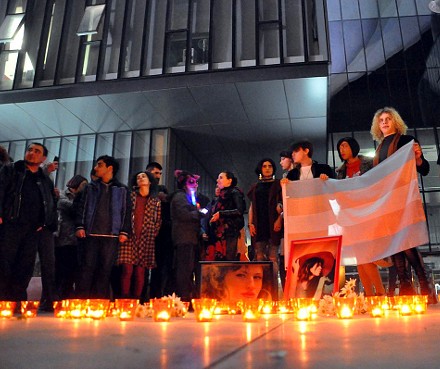 TBILISI, DFWatch–Friends and activists gathered Thursday to remember the transgender woman Sabi Beriani, who was brutally murdered in Tbilisi two years ago.

November 10 has become a national day of remembrance for transgender victims of violence, following the tragic murder which spurred activists to further highlight the precarious situation of trans people in a conservative society such as Georgia.

The memorial event was held in front of the House of Justice, as has become a tradition. In February 2016, Bianka Shigurova, another transgender woman, was found dead in her apartment, while a few weeks ago, transgender Zizi was attacked by strangers who cut her throat. She remains in hospital.

Beriani was stabbed to death and her flat set on fire, but the murder suspect was acquitted by Tbilisi City Court in August.

Activists observed a minute’s silence In front of the House of Justice, where red candles were arranged in the shape of a transgender symbol and pictures of Beriani and Shigurova were placed surrounded by flowers. Some held community flags.