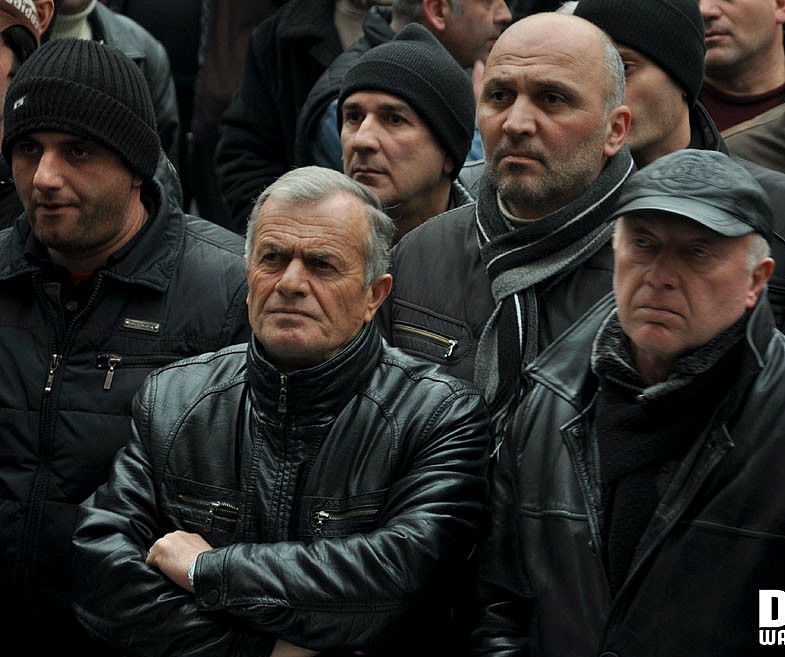 The minibus strike is stepped up as negotiations fail. (DF Watch photo.)

TBILISI, DFWatch — Almost no yellow minibuses are to be seen in the capital as the driver’s strike continues.

Sunday morning, a rally was held at one of the largest minibus garages, and drivers negotiated with Tbilisi Minibus, the company they work for, without results.

Drivers say the negotiations were pointless, as their main demand – to reduce the daily fee for drivers – was rejected by company representatives who say this process needs monitoring, which will take time. But drivers want to immediately reduce their daily fee.

The only demand which was partly satisfied by the company was to give recently fired drivers their jobs back, but this too will take time and will be done on an individual basis.

The meeting lasted more than an hour and a half, and since it ended without results, the strike will continue today from 10:30 at Tbilisi City Hall.

Later on Sunday, Tbilisi Minibus issued a statement about the meeting, writing that it is impossible to immediately decrease the drivers’s daily fees, as each minibus line has its individual specifics, which include number of clients and income. The company says it has a system where the fee for each line is calculated based on the number of customers, and that it will continue planning and implementing this system in order to arrive at ‘a fair correction of daily payment’, which may include decreasing or increasing it.

Another demand drivers have is to give them the right fix their car at a place of their own choosing. The company is forcing them to bring their car to a special center, where it is very expensive to fix it and they have to pay for this using the money they earn on driving.

The company says this is necessary out consideration for the safety of customers and traffic safety.

“Accordingly, the planned technical services will always be implemented at service centers which Tbilisi Minibus Ltd will define,” the statement reads, adding that the company is still ready to take into account remarks drivers might have regarding the process, quality and process of technical services.

There are about 2 000 minibuses in operation in Tbilisi. Only a few lines are currently working, and every day the number of striking drivers grows.