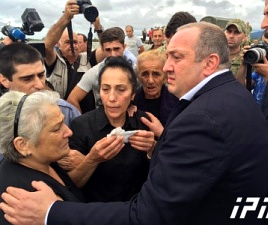 Two soldiers never made it up to the surface during a course in combat diving. As the search for them continued on Wednesday, information slowly began trickling out to the public about what may have gone wrong.

Special forces chief Dimitry Kiknadze, speaking in Gonio, where the fatal dive took place, ruled out technical malfunction, but refrained from sharing more details beyond stating that the investigation is ongoing.

President Giorgi Margvelashvili arrived in Gonio on Wednesday and met with the family members of the two missing soldiers.

“These are the gravest moments for the soldiers and I came here to express support,” he said.

Defense Minister Levan Izoria was also in Gonio on Wednesday.

The Turkish Coast Guard is taking part in the search along with U.S. and Georgian forces. An “Iroquois” type helicopter is being used. The search continued through the night and was still ongoing at press time Wednesday evening.

The father of Iago Sharadze, one of the missing, accused the Defense Ministry of not following security standards. He said that his son was a good swimmer and may have died because he was given wrong instructions.

Kiknadze said one of the soldiers probably died because he panicked.

“His breathing got intense and he likely ran out of oxygen.”

The special forces chief added that the instructor attempted to provide him with oxygen.

“[The instructor] indicated to him ‘one, two, three’ to help him breathe. They had visual contact,” he said.

The diving exercise was held at 17 meters’ depth.

The second instructor approached to assist.

“He brought him up to 5 meters’ depth and asked him how he felt. The soldier confirmed that he was OK and had oxygen. He got back down.”

When the instructor got back down to 17 meters below the surface, he saw that the soldier wasn’t moving. When he tried to bring him up, the instructor ran out of oxygen and went up. He fainted, felt sick and was bleeding.

The instructor is now in hospital. He is in a stable condition.