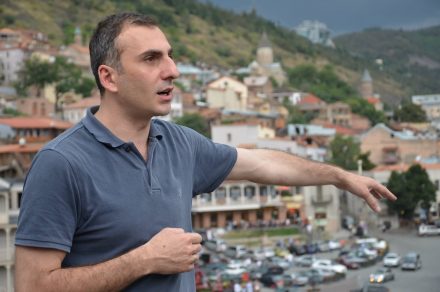 TBILISI, DFWatch–The independent candidate for Tbilisi mayor Aleko Elisashvili vows to suspend all construction projects in Tbilisi until there have been carried out comprehensive studies into all the schemes to see whether they are compatible with the urban fabric of the Georgian capital.

“I’ll break your hearts – permits to build 6.5 million square meters have already been issued but not yet built. Do you know how much it is? This is about the same as building another Tbilisi. [For example] in Moscow, which is 10 times bigger, up to three million square meters have been sold per year,” Alexander (Aleko) Elisashvili said during a video conference published on Facebook on Friday.

He pledged to issue a moratorium on construction projects as soon as he is elected Tbilisi mayor, and scrutinize each project to see it it conforms with the interests of the city. If it doesn’t, the permit will be revoked.

Tbilisi is currently experiencing a construction boom particularly in its uptown and central parts, including the Old City. The building spree has sparked outrage among many Tbilisians, as the vast majority of new buildings are hurting the capital’s aesthetic look and its infrastructure. Many Tbilisians suspect that there corruption involved in many of the construction schemes.

Aleko Elisashvili (39) is currently an independent member of Tbilisi Sakrebulo (City Council) and is famous for his vehement struggle to preserve the city’s historical sights. He enjoys great popularity among Tbilisi residents, but his lack of backing by any of the major political parties may be a significant hindrance in the elections, slated for the end of October.