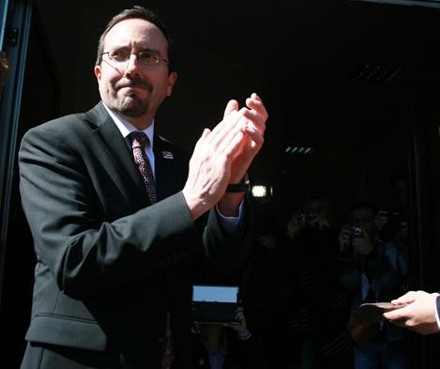 John Bass at the opening of the Batumi Center for Civic Engagement April 5, 2012. He was – U.S. Ambassador to Georgia at the time. (Archil Talakvadze/Facebook.)

Bass currently serves as the US ambassador to Turkey. From 2009 to 2012, he served as ambassador to Georgia. He was nominated by President Barack Obama to both positions.

Formally, Bass’s nomination needs to be confirmed by the US Senate.

Observers say he is being sent to Afghanistan at a critical moment. The situation in the country has reached a deadlock and for several years it has become clear that the coalition and the Afghan government are far from defeating the Taliban. The latter controls at least 40% of the country’s territory.

Currently President Donald Trump’s administration ponders the issue of sending an additional 4,000 troops in the country. At this moment 8,400 US servicemen are stationed in Afghanistan.