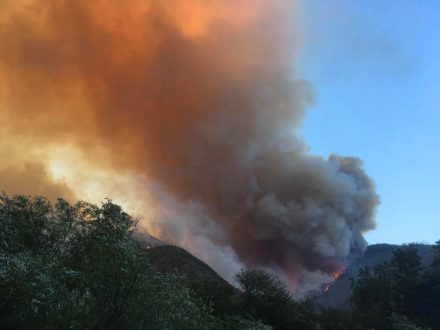 TBILISI, DFWatch–A massive wildfire was raging on Monday in Borjomi, a forested nature park and important tourist destination in Georgia.

The fire started Sunday in Borjomi-Kharagauli National Park but intensified Monday evening when it spread to over 6 hectares in the hills above the villages Tsaghveri, Sadgeri and Daba. It is about five km south-east of the town Borjomi, a popular mountain resort.

No casualties have been reported so far. However, residents of nearby villages feel uneasy and stay outdoors expecting evacuation if the fire further intensifies.

Prime Minister Giorgi Kvirikashvili visited the site and established a makeshift headquarters in the village Daba. He assured residents late at night that there was no necessity to evacuate.

About 270 firefighters and rescue workers have been mobilized, along with an unidentified number of volunteers, many of whom had driven in from other parts of the country.

The government has been criticized online in social media for its inability to put out the fire and for lacking much needed equipment, such as firefighting helicopters and planes.

The fire broke out in the same location as the 2008 Borjomi wildfire, which was caused by incendiary devices used by Russian military jets during August War. Russia has denied involvement.

Also in August, 2012 there was a forest fire here.