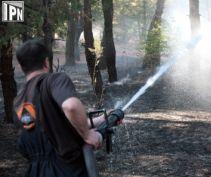 The fire took place in Borjomi, known for its mineral water and natural park popular among hikers. (IPN.)

TBILISI, DFWatch – About one acre of forest burned as a result of a fire in Borjomi, a resort town in eastern Georgia.

The fire started yesterday afternoon and wasn’t put out until Monday morning. What caused the fire is not yet known, but the reason might have been negligence or the warm weather. An investigation has been launched.

Local emergency service employees battled with the flames the whole night together with as team from the capital using helicopters.

“This place is not a populated area. There are summer pastures,” Levan Chachanidze, head of Bojromi Emergency Service tells Interpressnews. He adds that with the assistance of a team from Tbilisi they managed to soon localize the fire.

Now the place is being cleared of burned trees.

Last week, 15 acres of forest burned in the village Artana, Eastern Georgia. Personnel from the emergency service fought the fire for two days. The reason was negligence by shepherds.