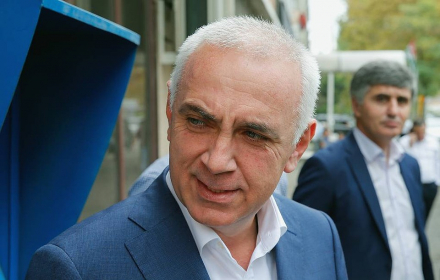 TBILISI, DFWatch–The opposition in Abkhazia is planning a rally in Sokhumi on Tuesday, which will be held in parallel with a court hearing in a lawsuit filed by the opposition candidate Alkhaz Kvitsinia to demand the results of the de facto presidential runoff annulled.

Kvitsinia and his supporters argue that the existing “constitution” requires a candidate to garner an absolute majority of votes in order to be declared the winner. As none of the candidates received more than 50% of votes, the opposition logic goes, the election result should be declared invalid.

Incumbent de facto President Raul Khajimba gained 47.4% of votes in the September 8 runoff, only 1% ahead of his opponent.

The current de facto government in Abkhazia has a different interpretation of the “constitution” and argues that a candidate only needs a simple majority in the runoff to win.

In addition, the opposition alleges that the election was rigged, accusing the de facto government of vote-buying and other electoral machinations.

“During the pre-election campaign, as on election day, there was mass bribing of voters and pressure on them. We have witnessed the extensive use of administrative resources, the country has literally been buried in concrete…” – says a statement released by the opposition Amtsakhara party, which nominated Kvitsinia as a candidate in the elections.

The court has to announce the decision on Alkhaz Kvitsinia’s appeal within 10 days.