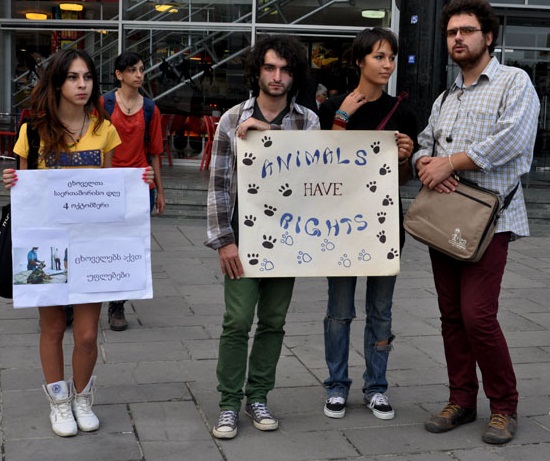 Tbilisi does not have enough capacity to take sufficient care of all its stray dogs, is one of the concerns of animal welfare campaigners. (Photo: Mari Nikuradze.)

TBILISI, DFWatch — While the country is rocked by political tension, rallies and protests, up to twenty students and others today gathered at Tbilisi Concert Hall to mark World Animal Day.

They told DFWatch that they view it as a day for the protection of animal rights and for reminding society of how inhumanely homeless animals are treated here.

Georgia does not have a large enough facility for caring for stray dogs and other animals.

It has been documented both by journalists and volunteers, how street dogs are killed by the so-called ‘dog liquidators’: instead of euthanasia, the animals are killed in violent ways.

Older footage shows how dogs are being taken to a deserted area near the capital, where they are locked in boxes and killed with sticks full of nails. Then the dead dogs are burned.

In the beginning of summer 2012, Tbilisi City Hall opened a new facility, which has become shelter for homeless dogs and other animals. The place offers medical assistance and other procedures, including inoculation and sterilization.

But the new shelter only has capacity for 350 animals. Some of the animals are sterilized, castrated and then marked with a number. After this procedure, they are returned to their living places.

But representatives of an animal protection group says this hasn’t really improved their situation, as there are other groups in the capital and other regions who still treat animals in violent ways.

There are several independent organizations, which hold dog shelters in different spots of the capital. But most of them don’t have enough financing and can’t take care of many animals on the donations they receive.

Guliko Putkaradze, who represents ‘Children of Nature’, also participated in today’s rally. She takes care of 40 dogs and ten cats in a region outside of Tbilisi and came here for the event.

“When they learned I take care of so many animals I received lots of food and other items for my animals today. It is a very happy day for me today,” she says.

Putkaradze adds that she owns a small plot of land near the airport, where she keeps those animals.

Georgia joined the list of countries annually celebrating World Animal Day as late as 2011, and the events have been modest in scale so far.