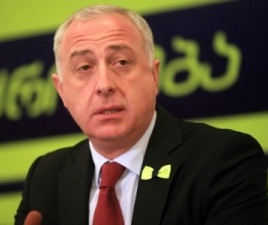 TBILISI, DFWatch — The leader of a decade old party has said he is leaving politics, sticking to a promise to leave if his party did not make it into parliament.

The New Rightists Party, which was established in 2001, gained only 0.43 percent of the votes in the parliamentary election, according to the latest figures from the Central Election Commission (CEC).

The threshold for being guaranteed places in parliament is 5 percent. Only two parties reached this benchmark; the National Movement party of President Mikheil Saakashvili, and Georgian Dream, led by billionaire Bidzina Ivanishvili.

Davit Gamkrelidze Wednesday said he is leaving as leader of the New Rightists Party. The reason is that his party did not reach the threshold. He thanked all supporters standing with him and his party for 12 years trying to implement positive changes together.

New party chair will be the current deputy. Gamkrelidze congratulated the Georgian Dream coalition on its victory, admitting it was a great achievement for every citizen as government changed through election.

Gamkrelidze said Mikheil Saakashvili’s statement two days ago conceding defeat was the most honorable decision he could make.

“There is a responsibility over national movement now so that winner party had strong opposition not to face danger of single-party management. Strong opposition won’t let this happen.”

The New Rightists Party used to have representation in parliament, but in 2008 the party refused to take part in the parliament elected that year, because of widespread election fraud. Instead, they joined the united opposition. Gamkrelidze said he would leave politics if his party didn’t make the 5 percent barrier in the 2012 election.

The Christian Democrat Movement, which formerly was the official opposition with a significant group in the last parliament, and whose leader was invited to BBC Hardtalk as the representative of the largest opposition party in Georgia, is also without representation in the new national assembly, garnering only 2 percent of votes.

But Christian Democrats leader Giorgi Targamadze will not step down, and says his party is satisfied with the results of the election, as it is the first time government has changed through election.

Targamadze thinks it will be better for the president to leave his post as soon as possible.

“We are dissatisfied with the results of the party, but it has objective and subjective reasons,” he said, and thanked all who supported them.

The party leader said the Christian Democrats have representatives in local councils and will start preparing for the next local election, which isn’t far away.

“Society had to make a decision in a shocking environment. Polarization was followed by the result that our part didn’t cross the threshold. But we plan to think of each mistake and continue active fighting.”