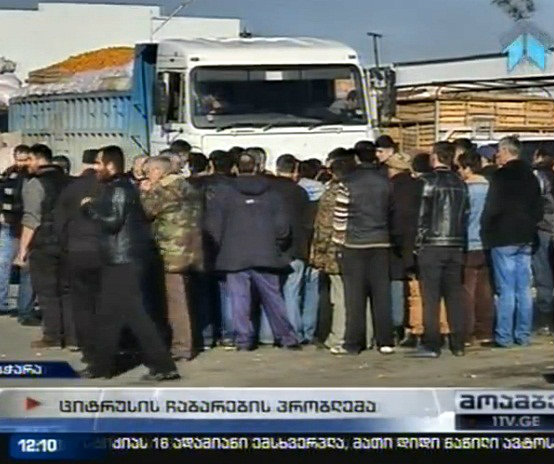 The vendors protested because a juice factory isn’t receiving their produce, which instead is left to rot. (1tv.ge.)

TBILISI, DFWatch–Citrus vendors in Georgia protested Sunday in Kobuleti on the Black Sea which against their produce not being taken in by a factory and instead left to rot.

The protesters said about 200 trucks are standing there loaded with mandarins, and the vendors have been waiting for their turn to deliver the fruit since December 26, but no-one picks it up.

Tamaz Bakuridze, a human rights activist who came to the rally, told journalists that if the citrus fruit isn’t received by factories in time, farmers will leave the rotten mandarins in the yard of the Adjara government as a sign of protest.

Later the same day, the minister of agriculture in Adjara’s regional government came to the rally and told participants that the plant which was supposed to take away the fruit had technical issues and the process has been delayed for seven hours.

He also said that the plant didn’t work during the holidays.

Farmers were dissatisfied by the minister’s statements, claiming that the local government lied and told them that the citrus season had failed. They demand the Adjara ariculture minister’s resignation.

“For twenty days my truck has been standing here, and mandarin juice is leaking from my car. There is frost here at night,” said Mevlud Chkhartishvili, one of the farmers.

He recalled that the former prime minister, Bidzina Ivanishvili, promised to solve the farmers’ problems, but nothing has changed. No plants have been built in Khelvachauri or Ozurgeti.

Minister of Agriculture Zaur Putkaradze said that the daily productivity of the plant is about 280-300 tons, that’s why there is a long line of trucks outside it.

Kobuleti Processing Plant pays ten tetris (USD 0.6) per kilo for mandarin, while the government of Adjara pays 10 tetris as a subsidy to farmers.

According to Agriculture Ministry, the mandarin harvest last year was 55 000 tons, while this year it was about 110 000 tons.