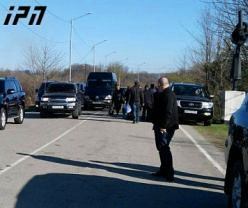 TBILISI, DFWatch–Georgia exchanged prisoners with South Ossetia and Abkhazia at the Enguri on Thursday.

According to the Ministry of Reconciliation and Civil Equality, agreement was reached with the de-facto governments of Abkhazia and South Ossetia about exchanging 14 Georgian citizens convicted in the breakaway regions with four South Ossetian prisoners held by Georgia.

The ministry informs that the prisoner exchange proceeded peacefully and was a result of direct negotiations with Sukhumi and Tskhinvali.

According to Sputnik Abkhazia de facto foreign minister of Abkhazii Viacheslav Chirikba and his South Ossetian counterpart Kazbulat Tskhovrebov participated in the exchange.

Tskhovrebov said that four persons from South Ossetia were arrested in 2005 by Georgian law enforcement and convicted.

“The presidents of the three countries signed the relevant decree of pardoning, and this event became possible,” Tskhovrebov said.