Lukashenko has arrived in Tbilisi

Lukashenko has arrived in Tbilisi 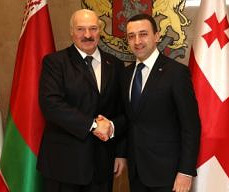 TBILISI, DFWatch–President of Belarus, who is on a first visit to Georgia, arrived in Tbilisi the day before official meetings, which are planned for April 23-24.

Even though the flight between Minsk and Tbilisi is over four hours, he arrived a day before with his 10-year old child.

It is Lukashenko’s first official visit to Georgia. He plans to meet his counterpart Giorgi Margvelashvili, PM Irakli Garibashvili and Speaker of Parliament Davit Usupashvili.

Traveling with him are representatives of government and business, who will participate in Georgia-Belarus business forum. The government delegation includes Vice Prime Minister, Interior and Foreign Ministers.

Major host of Lukashenko is Margvelashvili and the welcoming ceremony will be held at President’s Palace Thursday morning.

The visit was first announced in the beginning of February, when he mentioned it in Minsk after negotiations ended on crisis in Ukraine.