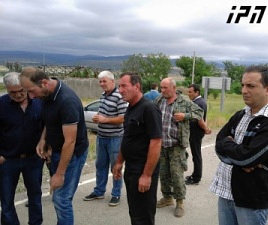 TBILISI, DFWatch–Locals gathered near the border with Georgia’s breakaway region South Ossetia on Friday to protest against the actions of a group of journalists who staged a protest a few days ago against Russia’s ‘creeping occupation.’

People say they have had problems as result of the journalists’ rally.

Russian border guards used to allow locals access to agricultural lands on the other side, but now they are not allowed to go there, they say.

Journalists a few days ago tore down a sign marking the de facto border and replaced it with a Georgian flag.

Yesterday, a group of seven armed people from the de facto republic came and removed the Georgian flag placed there by the journalists.

Locals are not happy with the way they are having to deal with the consequences of the journalists’ protests.

“We have to harvest and we are now restricted from harvesting,” Interpressnews quotes one of the locals saying. “Let those people come here now if they are brave enough, sit with us on combines and help us harvesting if they dare to take such risk.”

This morning, police forces were deployed near the villages Orchosani and Tsitelubani, and prevented people from entering that area.

The Ministry of Internal Affairs announced that no-one will be allowed into the area, apart from locals.

The reason for the restriction is to avoid provocation.