Locals demonstrate for and against turning mosque into culture center

Locals demonstrate for and against turning mosque into culture center 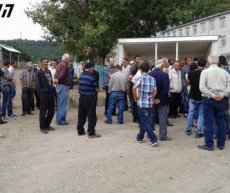 TBILISI, DFWatch–Muslims in Mokhe, a village in the south of Georgia, protested on Saturday, because they don’t want to give up an old mosque and turn it into a culture center.

The Orthodox population rallied against them demanding to construct a new culture center for the village.

The local newspaper Samkhretis Karibche reported that villagers didn’t like seeing workers on the area of the old mosque because Muslims in the village have been asking the local government to transfer the building to them for a while. But the Adigeni gamgeoba, to which the village belongs to, claims that the building has status as a culture house and they announced a tender to rehabilitate it.

The thing is that the vast majority of mosques, all functioning and old ones, are registered as a houses, or other facilities as the legislation of Georgia didn’t allow the registering of religious facilities and according to the Muslims this specific building was a mosque.

The company which won the tender wanted to start dismantling the building on Saturday, but there began a protest as soon as the workers came. People demanded that they leave. Meanwhile, the Orthodox population also came, and the workers left. But the Orthodox say they won’t allow the transfer of the building to Muslims, also to build ‘something Muslim’ there. The Muslims say they won’t allow the construction of a culture house instead of a mosque and plan to protect it by any means.

Both rallies dissolved peacefully, but the fate of the building is still unknown.

Most of the people in Mokhe are Muslims who were resettled here from the mountainous Adjara region in the middle of the 20th century.