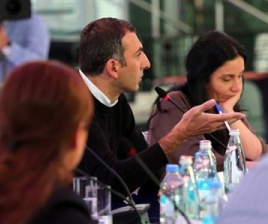 Aleksandre Elisashvili, a well-known TV journalist, is new head of the president’s pardon commission; one of two such bodies. (Interpressnews.)

TBILISI, DFWatch–President Giorgi Margvelashvili has replaced some of the members of the presidential pardon commission, one of two commissions which review applications from prisoners for reduced sentence or early release.

Aleksandre Elisashvili, a well-known journalist, will replace Elene Tevdoradze, who has chaired the commission for ten years and has been on the commission since 1995.

Margvelashvili said the new members were selected on the basis of how trusted they are by people and the ‘fact that none of them is related to any political force.’

New commission head Alexandre Elisashvili said that the commission will have clear criteria for pardoning prisoners. There are currently 600 applications at the commission, he said, out of which 150 cases have been approved. 200 cases will soon be sent from the patriarchate.

Elisashvili said the first meeting of the new commission will be held this week, and that it will be meeting more frequently than in the past.

“We plan to gather at least five times per year so that the commission doesn’t have to discuss 200 and 300 cases at once,” he said.