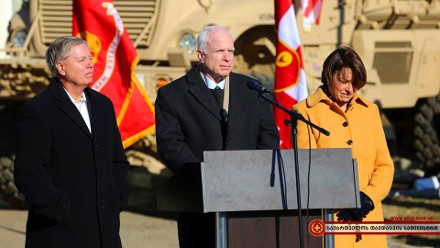 TBILISI, DFWatch–Three American senators wrapped up their trip to Georgia on Monday by sending not-so-well wishes for the new year to Russia and its president Vladimir Putin.

The two Republican Senators John McCain and Lindsey Graham and the their Democratic colleague Amy Klobuchar have been on a roundtrip in former Soviet countries.

In Georgia, they met PM Giorgi Kvirikashvili to discuss security in the Caucasus region and the road forward for U.S.-Georgia cooperation under the incoming Trump administration.

McCain accused the Russian President Vladimir Putin of aggression and said it’s necessary to stand together, otherwise this will continue.

He met with Georgia’s Prime Minister Giorgi Kvirikashvili and later visited the village Khurvaleti, which is located on the border to South Ossetia, one of two regions that broke loose from Georgia in the early 1990s and have been under the control of Russia since 2008.

McCain also show his support for the United National Movement (UNM), the party which ran Georgia from 2004 to 2012, but has recently been rocked by an internal feud.

“We always support good political climate, viable opposition and free media in Georgia,” McCain told reporters after the meeting with the UNM.

The party has been on the verge of splitting in two because some of the members want to distance themselves from the former party leader and President Mikheil Saakashvili; a personal friend of McCain’s.

At a stop at NATO’s new training center near Tbilisi, the outspoken Republican accused the Russian president of having annexed parts of Georgia and said the U.S. is a guarantee for the Georgian people’s freedom and security.

“Due to Vladimir Putin, the world is much more dangerous. In 2008 it illegally and amorally invaded Georgia, and then Crimea. Intense pressure is also being exerted on the Baltic states.,”he said.

McCain’s roundtrip in the former Soviet countries Georgia, Ukraine and Estonia was first reported by the Washington Post in November.

The aim of the trip is to assure the U.S.’ Eastern European partners that Washington is still committed to confronting Russian aggression, Washington Post wrote.