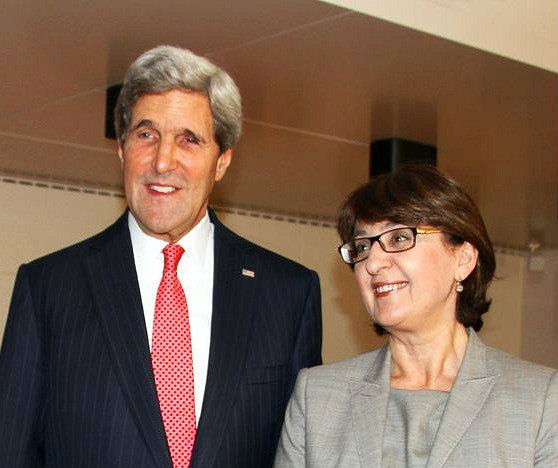 US Secretary of State John Kerry next to his Georgian counterpart, Foreign Minister Maia Panjikidze. (Photo published by the Georgian government.)

Kerry said after a meeting with Georgian Prime Minister Irakli Gharibashvili on Wednesday that he is looking forward to coming to Georgia and that the trip might take place in spring.

During the meeting, the two discussed Georgia’s economic challenges and its Association Agreement with EU which is expected to be signed this summer.

“I am announcing additional assistance by the United States to help support Georgia’s European and Euro-Atlantic vision; specifically, to help Georgia achieve visa-free travel with the EU and to mitigate the hardships caused by borderization along the occupied territories,” Kerry said.

He called on Russia to fulfill its obligations under the 2008 ceasefire agreement, including the withdrawal of forces and guarantee of free access for humanitarian assistance.

During his US visit, the Georgian PM delivered a speech at the Atlantic Council and outlined domestic and foreign policy priorities, and the country’s challenges and future prospects.

He suggested that Russia will increase its pressure on Georgia to call off the signing of a trade deal with the European Union, now that the Winter Olympics in Sochi is over, and pointed to the installation of barbed wire along the de facto borders with Abkhazia and South Ossetia, which Georgia considers occupied by Russia.

This happens despite positive steps by Georgia to mend relations with Russia, also by not boycotting the Olympics, and extending an offer of cooperation on security matters related to the Olympics.

He continued saying that there have been some positive signs after the Russian market became accessible for Georgian wine and agricultural products, transport links were restored and it became easier for Georgians to get a Russian visa, but still, the borderization around the Russian-controlled breakaway regions continues.

“These physical obstacles violate the fundamental human rights of the local population such as access to schools, cultivated land plots, water irrigations system and so on.”

Moving on to the topic of democratization, the PM hailed Georgia’s parliamentary and presidential elections in 2012 and 2013, and amendments to the constitution which transferred power from the president to the prime minister.

He also pointed to the fight against elite corruption, money laundering, pressure on business and reforms of the courts as examples of how the Georgian Dream coalition is succeeding in making the country more democratic.

When it comes to the economy, Gharibashvili said the new government is doing its best, using inclusive growth and through improving the business climate. He recalled that the country has been named as one of the countries where doing business is very easy.

The prime minister, who is now the most powerful person in Georgia, said the EU trade agreement which is to be signed within the next few months is seen as a ‘master plan for the Europeanization of the country.’