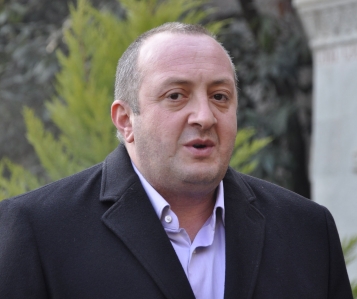 TBILISI, DFWatch–President of Georgia Giorgi Margvelashvili says he hopes that the barbed wire which Russian soldiers are installing at the so-called border with two breakaway territories will eventually be sent away peacefully as scrap metal.

Margvelashvili on Wednesday met with the people in the village Atotsi, near Kareli, where in the last few days, Russians have started installing barbed wire and warning signs about the so-called border with the breakaway region South Ossetia.

Russia occupied about a fifth of Georgia’s territory after the war in August 2008, in two regions where there was conflict and where Russia attempted to escalate this conflict. After the war, Russia recognized the independence of the two separatist regions. Russian troops are on these territories and de facto governments are controlled by Russia.

Despite attempts by the new government to mend relations with Russia, Russians continued to move the borders. The process was suspended during Sochi Winter Olympics, but resumed as soon as the games were over; houses, gardens, agriculture lands ended up on the other side of the wire.

The president arrived in the village together with Secretary of the Security Council, Irina Imerlishvili, and Minister of Regional Development, Davit Narmania.

Villagers spoke about their problems.

The president told them he had come to support them.

“Nothing happens that we aren’t paying attention to. We have very serious friends, who support us,” he said. “With these friends we set the way out which we must go together.”

He continued saying that now, when the process of installing barbed wire continues, the government and the people should not follow the provocation but act reasonably.

“These wires have no strategic function. They are made in order for people to not connect with each other. This danger appeared after reforms and processes in Georgia after which our brothers in Tskhinvali desired to connect with us,” he said.

Margvelashvili said personal ties were about to be restored and the intention with the barbed wire was to try to prevent this from happening.

“Eventually, by kindness to these people, our Ossetian brothers, based on relations with them, we will peacefully send these wires away as scrap metal.”