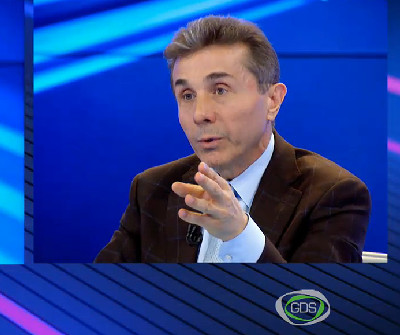 The businessmen quit politics a year ago and started the non-governmental organization ‘Society 2030’, whose purpose is to ‘train analysts’ who can help people see the real situation in the country.

In Sunday’s broadcast, he elaborated that the NGO will protect people from falling for the propaganda of the National Movement, which in his view is widely spread all over television nowadays.

In the end of 2011, at a time when his fortune was estimated to be about UDS 6 billion, Ivanishvili decided to go into politics, declaring that he would remove the National Movement government through the ballot box. He succeeded in doing this by creating the Georgian Dream coalition, and as promised he served as prime minister for about a year and then left office.

He was rarely seen in public after leaving office and has given only a few interviews. His NGO ‘Citizen’ has also been quite passive, but a few months ago, in an interview with the Public Broadcaster, Ivanishvili said he was planning to be a part of a commentary show, where he would also be a host along with others, but later he changed his mind and appeared on the show only as a guest.

The show was first aired on Sunday at 2030 and lasted about an hour and a half. Sitting next to him were economic analyst Nodar Chichinadze and journalist Keti Chokheli, both members of Society 2030.

Ivanishvili said the NGO has about 60 members and the number may increase, while the show will host different analysts from time to time, including himself.

He said that the analyses done by these people may be criticized, which will be responded to, however ‘mistakes will probably be rare.’ He spoke about the importance of people perceiving reality correctly and that today’s media is completely free from pressure by the government, but the ‘influence of the owners’ is a different subject for analysis.

As usual, Ivanishvili spent a lot of time criticizing the National Movement, both the party itself and the government it ran for nine years until 2012, and he also spoke in positive terms about the performance of the current government.

Ivanishvili also spoke about the economic situation in the country, as there is a concern among people about a drop in the value of the national currency, lari.

“We face the threat of very strong and pleasant economic growth,” he said, adding that he wants to reassure people that conditions conducive to economic growth will have fruitful results and follow external factors, and the timeframe of this trend is a matter of ‘a few months.’

“We are doomed to being registered as a successful country and get back to our European family.”

The ex-PM also said that it is not possible to build ‘a European economy’ in five or ten years; 20 years may be needed. However he doesn’t rule out that Georgia will be ‘another Dubai.’

“What can be done rapidly we did rapidly. In two years we took a huge step and now we can compete with any developed country with democratic values. However, the economy has this nature that in two or five years you cannot turn it into a European [economy].”