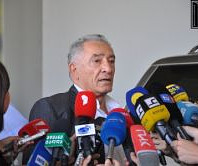 TBILISI, DFWatch–The leader of a party that is member of the ruling coalition says that joining NATO doesn’t have to be a priority for Georgia, because the alliance doesn’t plan to accept Georgia and it may also bring problems for the country to join NATO now.

The faction Industrialists has six members of parliament and is part of the parliamentary majority. One of them is Gogi Topadze, a businessman and leader of Industry Will Save Georgia, or Mretsvelebi, a member of the governing Georgian Dream coalition.

Topadze, who is owner of the well-known Georgian beer brand Kazbegi, has in the past made statements criticizing the International Monetary Fund (IMF) and the World Bank. In the last few days, his criticism has been directed against NATO, which Georgian Dream has a declared goal of joining.

On the website of parliament, Industrialists also has a declared goal – ‘integration in European and Euro Atlantic structures.’

“Let’s remember what your NATO did to Yugoslavia: It ripped apart a whole country in the middle of Europe, not to mention Iraq and Syria,” Topadze said in an interview with daily newspaper Rezonansi.

He continued saying that neither the United States nor its regional counterweight Russia will protect its own allies, which is why it is better to be neutral.

“We must achieve this by development our economy. What should we do in a military bloc?”

Topadze says NATO doesn’t even plan to accept Georgia and the US President Barack Obama and France’s François Hollande have openly said this.

“Many people might not agree with me, but Georgia can achieve economic growth and be independent and neutral. Everybody needs us because of our location. We must achieve neutrality and not be dependent on NATO or Russia,” he said in an interview with another newspaper, Versia.

“Let’s imagine one example: NATO enters Georgia, locates ballistic missiles in Caucasus and pointed them directly at the Kremlin. Nobody says that they will accept us in NATO after ten years so they shouldn’t lie to people. We do not support that, me and my partners.”

Commenting on the Russia-led Eurasian Union, Topadze said that unlike joining NATO, it would be economically more beneficial for the country to join the former.

He said the ruling coalition is conducting the opposite politicy, and he, as a member of the coalition, is ready to comply with its common policy, but he adds that he has many allies in the coalition.

Other members of the coalition have distanced themselves from Topadze and said it is not the coalition’s opinion, but his personal views.

But significantly, the ruling coalition has not officially denounced Topadze’s statement. DF Watch tried to ask Georgian Dream for an official comment,  but despite our attempts no-one was willing to comment on behalf of the coalition.

Zurab Tkemaladze, another member of the party who chairs parliament’s budget and finance committee, agrees with Topadze about NATO integration but says the Industrialists is not an anti-western party.

“European countries tell us today that steps taken to get closer to NATO may bring great threat to Georgia, but also to the region. They bring up Ukraine as an example. Don’t you portray us as enemies of Europeans. If the Eurasian Union is better, we may say no to Europe,” Tkemaladze said.