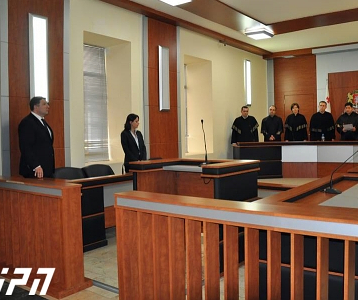 TBILISI, DFWatch–A court in Tbilisi ruled Sunday that a former mayor and close ally of Mikheil Saakashvili must stay in prison on aggravated charges recently presented by prosecutors.

The ruling in Tbilisi City Court came not long before ex-Mayor Gigi Ugulava had been in pre-trial detention for the maximum period of nine months.

“I have not come here to participate in the hearings,” Ugulava said in the courtroom.

The former mayor then left the courtroom and asked all of his supporters to follow suit.

Both episodes deal with the infamous events of November 7, 2007, when the police and special forces brutally dispersed an opposition rally in Tbilisi and then broke into the studios of Imedi TV.

Badri Patarkatsishvili, a Tbilisi-born businessman who made his fortune in Russia and was a long-time friend and business partner of Boris Berezovsky, was widely regarded as being behind the mass protests. The government justified its action by claiming that Imedi TV, which belonged to Patarkatsishvili, had been promulgating mass unrest and subversion of the constitutional order.

After that, the Tbilisi Mayor office stripped Badri Patarkatsishvili of another of his properties, the amusement park on Mtatsminda, a hilltop above the center of Tbilisi.

After that, the 52 year old Patarkatsishvili had to leave Georgia for the UK where he soon died of a heart attack in his luxury mansion near London.

“According to the decision rendered against Giorgi Ugulava, the factual circumstances of his charges were clarified, and the classification of the offense was also changed to Article 333 §1 of the Criminal Code of Georgia (exceeding official powers –  Mtatsminda Amusement Park episode), Article 25, 182 §2 (a) and  §3 (b) of the Criminal Code of Georgia (assistance in embezzlement – the episode of embezzlement of the property of Mtatsminda Amusement Park) and  Article 25, 194 §3 (b) and (c) of the Criminal Code of Georgia (assistance in the legalization of illegal proceeds – IMEDI TV episode) which entails the deprivation of liberty for a term from 9 to 12 years as the type of penalty,” reads official statement of the Prosecutor’s Office of Georgia released on Saturday referring to the ex-mayor by his full name, Giorgi.