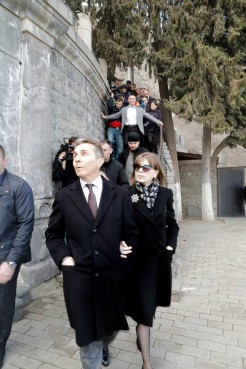 By Dave Bloss and Nino Bakradze

Former Prime Minister Bidzina Ivanishvili is now claiming he lost more than $US500 million due to mismanagement by Credit Suisse Bank and by directors of an offshore asset fund he controlled.

According to documents from two separate court cases in the offshore havens of Bermuda and the British Virgin Islands, Ivanishvili put over $US725 million into two huge tax-free insurance policies in Bermuda.

A $US480 million policy was placed in 2011 in Meadowsweet Assets Limited, an offshore fund that OCCRP identified in April in a story based on the Panama Papers leaks.

Bermuda is a popular offshore haven because it is possible to purchase and hold huge insurance policies. These policies can then be placed in asset management companies, with no taxes charged on profits.

Under the Bermuda Life Insurance Act, any money in these policies is not considered part of the estate of the insured, and therefore is not subject to any possible claims by creditors against the insured.

Credit Suisse Life (Bermuda) Ltd. has become a target for countries anxious to collect more tax revenues from wealthy citizens. In 2012, German tax inspectors investigated about 5,000 of its citizens who held such policies. Credit Suisse stated that such tax-free insurance policies were legal in their home office country of Switzerland, but that policy holders would have to deal with tax officials in their own countries.

In 2011, Credit Suisse agreed to pay a 150 million Euro fine to German tax officials after an investigation into how the company helped Germans dodge taxes.

“In this case we cannot give you precise information why the team that manages his (Ivanishvili’s) assets decided to invest in this and other funds, since this team takes into account many factors that affect their decisions on where to invest,” wrote George Bachiashvili, chief executive officer of the Georgian Co-Investment Fund created by Ivanishvili in 2013, in reply to e-mailed questions.

“As for the conflict between Credit Suisse and German authorities, any large financial institution may have some problems and be ordered to pay fines. But that does not mean they are not reliable institutes.”

At a June 14 press conference in Tbilisi, Ivanishvili said: “I did not lose this money. The bank lost this money. The money disappeared from my bank account and the bank should cover this loss. My lawyers are working on this. I am not worried because Credit Suisse is responsible for its mistake.

“I was a banker in Russia, and I have sympathetic feelings for Credit Suisse. But I can harm them seriously if we talk about everything involved.”

In a lawsuit filed in Bermuda, Ivanishvili accuses Credit Suisse Life (Bermuda) Ltd.  and the bank’s main office in Geneva of mismanaging his money. He estimated the loss at $US554,227,688 as of December 31, 2015.

In a lawsuit filed in the British Virgin Islands, Ivanishvili demands that the directors of Meadowsweet Assets Limited pursue legal complaints against the Bermuda bank, the main office bank in Geneva, and Patrice Lescaudron, a Credit Suisse money manager in Geneva who handled an Ivanishvili account that lost an estimated $100 million in 2015 when the stock price of American company Raptor Pharmaceuticals collapsed.

Lescaudron is currently in custody in Switzerland as investigators look at his handling of the accounts of Ivanishvili and other ultra-wealthy investors.

The directors of Meadowsweet Assets, the defendants in this lawsuit, are Bukit Merah Limited and Tanah Merah Limited, two companies linked to Lynden Management Limited, an offshore company owned by Ivanishvili, according to the Panama Papers.

These documents were obtained by two reporters from the German newspaper Suddeutsche  Zeitung, who shared them with reporters around the world in a partnership organized by the International Consortium of Investigative Journalists (ICIJ).

Ivanishvili, whose wealth was estimated at $US4.8 billion in a Forbes Magazine 2016 ranking of billionaires,  was asked about his offshore holdings at the June 14 press conference. He said he was operating within the law, and told journalists they could check anything with the Georgia Prosecutor’s Office.

The earlier OCCRP story, which reported that Ivanishvili refused to supply a copy of his passport for over three years as required by anti-money laundering regulations, was big news in Georgia for several days. But when asked at the June 14 press conference about the passport copy, he said: “That’s the first I’ve heard about this.”