Ivanishvili blames the head of the National Bank for currency crisis

Ivanishvili blames the head of the National Bank for currency crisis 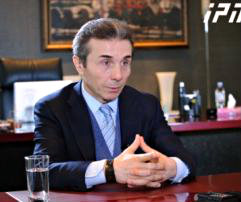 TBILISI, DFWatch–Former Georgian Prime Minister Bidzina Ivanishvili weighs in on the question of who is to blame for the more than 30% depreciation of the national currency in recent days.

The businessman blames the National Bank and its head, who he assumes is a former government cadre, for “his inaction and wrongdoing” that “dragged us into the crisis.”

Ivanishvili sent his statement out through by his non-governmental organization ‘Society 2030’ and it was published Thursday afternoon by the new agency Interpressnews.

In the statement, he argues that the lari rate shouldn’t have surpassed 2.00 laris per US dollar, while on Thursday the official rate, set by the National Bank, was over 2.26, which caused panic among Georgians.

The central banks of other countries in the region spent a significant part of their reserves in order to prevent an abrupt change in the exchange rate, according to Ivanishvili: Armenia 34 percent, Moldova 30 percent.

This caused their national currencies to stabilize. However, the National Bank of Georgia spent only 5 percent (USD 120 million), which has yielded no tangible results, he continues.

“The Bank has enough leverage to ensure the stability of the national currency,“ the statement goes on. “Taking into account all objective factors, the exchange rate should not exceed 2.0 lari (per 1 US dollar) and I urge the president of the National Bank to perform his constitutional duties and take adequate steps,” the former premier writes.

Ivanishvili holds the president of the National Bank, Giorgi Kadagidze, responsible for the tanking lari rate has caused uproar throughout Georgia and significantly impaired the credibility of the current government.

However, according to Georgian laws, the NBG is an independent body and its president is elected by the members of the Bank’s board for a 7 year term. Kadagidze’s term expires in February, 2016.

In his statement, Ivanishvili directly points to Kadagidze’s alleged ties with the UNM.

“It is the competence and direct responsibility of the National Bank to manage the situation properly…. We have seen the opposite, the President of the National Bank, Gieorgi Kadagidze, appointed by the  National Movement dragged us into the crisis by his inaction and wrongdoing,” Ivanishvili states.