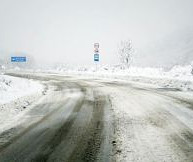 TBILISI, DFWatch–Traffic was restored Tuesday for heavy vehicles on the SH-17 between Tkibuli and Ambrolauri, according to the Roads Department.

The SH-7 is still closed for all traffic between Kala and Ushguli.

In Svaneti, between Khaishi and Kala four wheel drive cars are allowed, while other vehicles must use snow chains.

In the south of Georgia, the SH-31 remains closed for all traffic between Nardevani and Rodionovka near Ninotsminda due to strong wind and poor visibility.