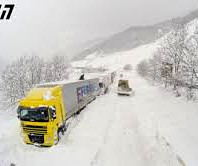 TBILISI, DFWatch–A key mountain road that connects north and south Caucasus is now closed for large vehicles because of snow and ice.

Trailers, semi-trailers and vehicles with more than 30 seats are prohibited from driving on the S-3 between Gudauri and Kobi, the Road Department announced on Tuesday.

Other types of vehicles are allowed. The Road Department has sent machinery to clear the road of snow.