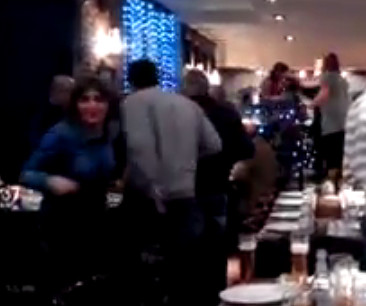 In addition to himself, the other victims were Nino Macharashvili, Irakli Kiknavelidze and their friend Avto Koridze at the restaurant Chashnagiri in the old part of the capital.

According to Sutidze, the reason for the attack was Tabula’s alleged ‘immoral attitude’ towards the Georgian Church. The attackers crushed the tables in the restaurant.

Tabula quotes Kiknavelidze saying that he and his friends have slight injuries. Police arrived and an investigation has been launched under the Criminal Code for beating. Further details are not yet known.

A person who was present at the restaurant posted a short video of the incident on Facebook, but wrote that he wasn’t able to shoot longer video, because a waitress prevented him.

“There was massive disorder, so we decided to leave the place,” he writes.

“They were overturning tables and throwing plates.”

He writes that he didn’t know the reason for the fight, but he heard the attackers shouting ‘Orthodoxy’.

“There were tourists at the restaurant as well. They left first. [They] were too scared.’

Tabula has a talk show, ‘Talks about Religion’, hosted by Levan Sutidze. It invites guests from different religious confessions and often criticizes the policy of the Georgian Orthodox Church.