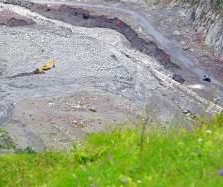 TBILISI, DFWatch–The road through Dariali Valley in northern Georgia will be open for traffic in about two weeks, Infrastructure Minister Nodar Javakhishvili said on Thursday.

For the moment, the road connecting Russia and Georgia is cut off due to a landslide on June 23.

The mudslide destroyed about 800 meters of the Mtskheta-Stepantsminda-Larsi road, which leads to the border with Russia, and it had to be closed between the 134km and 135km mark, near Gveleti.

The debris caused the river Tergi to change its course, but the Road Department said the river has now been moved back to where it ran before. Work is now concentrated on restoring the road, and about 40 pieces of machinery are involved.

The road through Dariali Valley is also important for supplying Armenia with Russian produce, and Prime Minister Giorgi Kvirikashvili said Thursday that an alternative route, by ferry, is now being used to bring fruit to that country.

“As far as I know there is a ferry available for transportation,” he said. “Not only for Armenia, but our exporting companies also use the ferry, and this issue has been solved temporarily.”