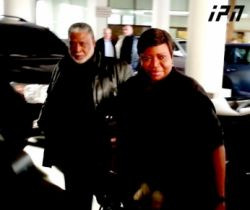 TBILISI, DFWatch–Prosecutor Fatou Bensouda of the International Criminal Court (ICC) arrived in Georgia Thursday, to determine if there is basis for a trial for war crimes in the 2008 war.

Bensouda earlier this week filed a 160 page long request to authorize an investigation of war crimes and crimes against humanity allegedly committed during the August, 2008 war in Georgia.

The investigation will cover the period from July 1 to October 10, 2008, and attempt to establish whether there is a reasonable basis for further investigation.

The case is only allowed in court in case a state is not able to or doesn’t investigate crimes. During the seven years that have passed, ICC has had communication with prosecutors in Georgia and Russia and has been supervising investigations of the crimes committed during the war in 2008. However, these investigations have not yet finished, neither in Russia nor in Georgia, and no-one has been brought to trial.

Possible war crimes to investigate are the killings of ethnic Georgians, forced displacement and persecution, looting and property damage by South Ossetian forces with alleged participation of Russian forces, attacks of South Ossetian armed forces against Georgian peacekeeping forces and deliberate attack by Georgian armed forces against Russian peacekeeping forces. The investigation may also look into other kinds of cases, like attacks on civil property by Georgian and Russian forces, violence, rape and other offenses.

On Wednesday, Bensouda published a video about her request for an investigation.

“Over time, based on the evidence collected by my investigators, I will then request ICC judges to issue either summons to appear or arrest warrants against those my office believes to be most responsible for alleged atrocity crimes committed in Georgia, no matter who they are,” she said.

In her preliminary conclusions, she describes that there is reasonable basis to believe that South Ossetian soldiers forced about 13,400-18,500 Georgians to leave homes, deliberately killed between  51 and 113 ethnic Georgians, and destroyed or damaged more than 5,000 dwellings belonging to ethnic Georgians.

ICC launched a preliminary investigation into the war in August 2008. Since then, numerous organizations have described the consequences of the war and the weeks and months of lawlessness that followed.

The Norwegian Helsinki Committee wrote about ethnic cleansing in the conflict region.

“The human rights monitors found evidence of the burning of houses, attacks on civilians and forced displacement of the Georgian population as late as Friday 17 October,” their 2008 report reads.

The report was based on interviews with people who had been forcibly displaced and says that systematic attacks on civilians continued after the war.

“During the first phase of the armed conflict, both parties seem to have committed war crimes in the form of indiscriminate bombings and disproportional use of force against mixed or civilian targets,” the report reads. “In the second phase of the conflict the civilian population was specifically targeted in those areas effectively controlled by the Russian armed forces. These actions have lead to ethnic cleansing.”

Even in October 2008, almost two months after the war, the observers found houses still smoldering, allegedly set on fire a few days prior.

“There were several indications that looting was still going on in the village while we visited it, and there were credible reports that civilians, including old women, had been beaten, threatened and forced to leave the village as recently as last weekend.”

Burning and looting of Georgian houses was also described in reports by Human Rights Watch. The organization’s observers describe cases they documented shortly after the war.

“For the second day running, houses were ablaze in several Georgian villages. They had clearly just been torched,” the organization wrote.

In response to the ICC prosecutor’s filing, HRW published another letter drawing attention to findings indicating that South Ossetian militias killed, beat and intimidated ethnic Georgians, burned and looted their houses with a goal to force them out from their homes and region.

“Human Rights Watch also documented indiscriminate and disproportionate attacks by both Georgian and Russian forces, which may have amounted to violations of the laws of war.”

The Georgian ombudsman also responded on Thursday, welcoming the decision by the ICC prosecutor. He wrote in a statement that in 2013 and 2014 parliamentary reports, the Georgian ombudsman wrote about crimes committed during and after the war, requesting the local prosecutor to properly investigate those crimes, including cases of missing people.

ICC prosecutor Fatou Bensouda arrived in Georgia on Thursday. She will meet Friday with the justice minister and prosecutors. Later, will meet victims of the war.