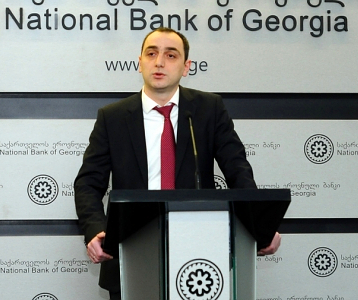 TBILISI, DFWatch–The president of the National Bank suggests reducing the number of ministries in Georgia in order to save public money.

In an interview with Rustavi 2, Giorgi Kadagidze drew attention to Switzerland, a developed country which has eight ministries, while Georgia has 19.

“If you ask me how to reduce bureaucracy, I would tell you that Georgia is governed by 19 ministries, not to mention different agencies and subordinate bodies.”

He adding that there is great opportunity in reducing bureaucracy, like merging the Ministry of Euro-Integration with the Foreign Ministry, or close down the Prison Ministry, as there is no such ministry in Europe.

He also suggested merging the Sports Ministry with the Education Ministry, and canceling the Ministry of Culture, which he called a ‘holdover from the Soviet Union.’

This way, Kadagidze explained, the country would save millions, and spurring economic growth.

His other recommendation concerned planning the annual budget.

“It is not right to spend money on everyone. Money has to be spent on those who need it most.”