Groups under threat in Georgia mobilize to defend rights

Groups under threat in Georgia mobilize to defend rights 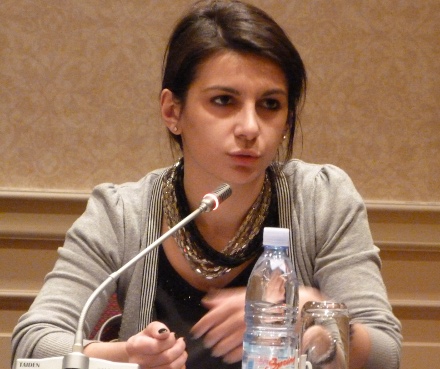 Tamar Chugoshvili, leader of Georgian Young Lawyer's Association, was one of many outspoken civil society representatives at Friday's meeting who are asking parliament to reconsider the new rules about party financing, which are now used against election observers and other groups. (Photo: Mari Nikuradze.)

TBILISI, DFWatch – Organizations in the former Soviet republic of Georgia are planning to take immediate measures together with media workers to protest against a new law amendment which they claim poses a serious threat to freedom of speech, freedom of the media and democracy, restricts civil activity and the freedom to engage in political activity.

The campaign against the changes to the Law about Political Associations of Citizens is called ‘It’s About You’, and will consist of a number of protest rallies and public meetings with representatives of civil society. Different ideas were heard today on a meeting held in Tbilisi Marriott Hotel; editors, journalists, heads and interested parties attended the meeting.

The head of the media unit Obiektivi and the owner of independent TV company Kavkazia expressed their concerns that the law is directed against freedom of the media too, and they argued that immediate measures should be taken.

They suggested running commercials regarding on TV and radio in order to inform people of what is happening and tell them about the threats and dangers will be in case the amendments are adopted once more.

A draft petition text was brought to the meeting to work on, which will be published in the newspapers on Monday. It demands that the Georgian parliament immediately amends the legislation, taking account of the legislative initiative prepared by the NGOs.

NGOs claim that the changes defines a difficult and unjustified responsibility on the voters; grants an undefined and unconstitutional authority to the main controller of party financing, the Georgian Chamber of Control; and worsens the election environment in Georgia.

Nino Khatiskatsi, representative of Transparency International Georgia, says that the new amendments make the law unclear, giving numerous opportunities for interpretation and it can apply to each citizen.

“If I work in some NGO and I will express my position on some meeting that I think a certain party is a savior of the country and I support it or the opposite, that this party will be destructive, according to the law, it may become grounds for the same restrictions as applies to political parties, being applied to my organization, where I’m working,” Khatiskatsi says, adding that in this case they will no longer receive financing from donors and she won’t receive a salary anymore.

“Let’s set a date and plan the rally,” was one of the proposals heard today.

“The rallies should be informative and emotional so that people can learn what is going to happen to their rights.”

The representatives of Georgian Young Lawyers Association, ISFED and Transparency International Georgia say that they already have met with foreign diplomats to explain the new changes to them. They say the meeting had a real result, as the diplomats learned what is happening and were concerned.

The organizers and audience at today’s meeting agreed to inform people in the regions too.