Party finance watchdog may be willing to curb its powers

Party finance watchdog may be willing to curb its powers 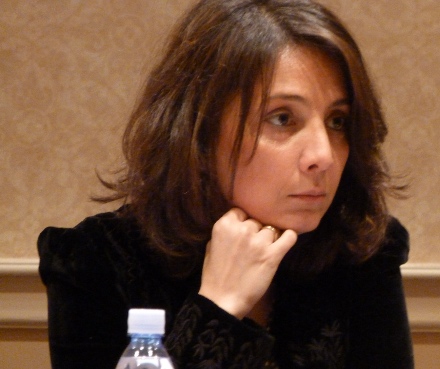 “By now, organizations are dependant on the Chamber of Control,” says Nino Khatiskatsi from Transparency International Georgia. (Photo: Rusiko Machaidze.)

TBILISI, DFWatch – Several leading Georgian organizations are now demanding clearer limits for the powers of the country’s party finance watchdog. The Chamber of Control itself is considering changes in its powers.

The groups met Friday with the head of the Chamber of Control’s financial monitoring unit to discuss a recent control effort directed against two non-governmental organizations.

After the meeting, Levan Bejanishvili, head of CoC, expressed a wish to cooperate and said the Chamber is working on recommendations to amend the law.

The organizations are not directly part of the political scene, but indirectly involved. One of them is known for having helped in election monitoring during elections in 2008 in which there were many irregularities that needed observing. But the CoC has decided that the organizations have an intention to try to affect the outcome of this fall’s election, and that they therefore must follow the rules about party financing.

Parliament changed a law about political associations of citizens at the end of December, making it much stricter than before. Under the new rules, the same restrictions apply to all legal and individual persons, who directly or indirectly are connected with political parties.

The decision was resisted by experts and civil rights activists, because it might mean that non-governmental organizations won’t be able to get financing.

The government then made statements that this restriction didn’t apply to the non-governmental sector and that it was unclear to them why people were objecting to the new rules.

However, the Chamber of Control requested to know the finances of two NGOs on February 8, which say they don’t have any connection with political parties.

The head of the Chamber of Control states that the reason they requested a financial report from the organizations is to find out whether they have such a connection or not.

Representatives of NGOs now fear that restrictions which apply to political parties will be applied to them.

“By now, organizations are dependant on … on the Chamber of Control,” Nino Khatiskatsi, representative of Transparency International says.

The organizations are demanding an amendment to the law so the authority of the CoC is specifically defined and delimits in what kind of cases they have the right to request financial reports.

Nino Lomjaria, head of ISFED said the Chamber of Control itself has certain recommendations regarding the issue and that Levan Bejanishvili, head of CoC, told them that the chamber would only welcome if the NGOs will cooperate with parliament regarding changing the law about political associations of citizens. But he also says that they are not going to initiate this.