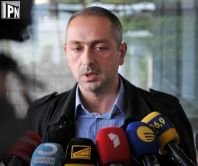 TBILISI, DFWatch – Georgia’s Interior Ministry accuses an opposition advisor of having tried to bribe a policeman into recording what was being said at meetings in the police.

One person is arrested who is an associate of Irakli Sesiashvili, one of opposition billionaire Bidzina Ivanishvili’s political advisors. Another person is wanted by police.

Representatives of the Ivanishvili’s Georgian Dream party say it’s all lies and call it another example of political harassment by the government.

The brunt of the accusations derive from two video recorded confessions. According to the Interior Ministry, Zaza Chelidze, an associate of Sesiashvili, bribed policeman Lasha Kurtanidze and demanded that he make secret recordings of meetings among the police to find out their views and attitudes. In return Chelidze gave Kurtanidze an envelope containing USD 3 000, money which he got from Sesiahsivli.

Shota Utiashvili, head of the Interior Ministry’s Department for Analysis, Sunday presented recordings as he explained the charges.

Utiashvili says the Interior Ministry obtained information that one police employee had been bribed. Specifically, Lasha Kurtanidze was instructed to make secret recordings of policemen. Kurtanidze is an employee of Igoeti regional police department in Kaspi, a town about 80 kilometers from Tbilisi.

Utiashvili says in order to gather evidence against Kurtanidze, authorities let the meetings continue after they became aware of the plot, and thereby provided proof of how recordings were made and transferred. He said Kurtanidze admitted guilt after having been presented with the evidence, and declared his willingness to cooperate with investigators. After this, he started working for investigators and made a recording of Zaza Chelidze. However, the next time he was about to make a secret recording, he warned Chelidze, and then went into hiding.

Chelidze is under arrest, Utiashvili says, while Kurtanidze is being searched for. Members of his family tell media that he disappeared on Saturday. His mother says before the disappearance that he was on an assignment, but he returned in ‘strange condition’. Lali Kurtanidze remembers it happened about week ago.

“My son came together with some person and introduced him as a co-worker. He told me they arrested a person in Sarpi and until they were finished with this case he couldn’t come home. Next day he came back. I was sure he had an assignment. It was strange that my son wasn’t wearing t-shirt and he had traces of violence on his neck. When I asked, he answered that a sea wave got him crawling in the sand. What I’ve seen today on TV made me sure that my son didn’t have an assignment, but was captured.”

She explains that after that, she doesn’t know anything about her son and his wife. She says she doesn’t even have the opportunity to hire a lawyer for his wife, and asks for help.

The Interior Ministry’s recorded confession by Lasha Kurtanidze before he disappeared shows him saying that in April he got introduced with Zaza Chelidze at the house of his friend Joni Kurtsikidze. Zaza Chelidze told him that the government has already changed and got interested what Kurtanidze could do ‘to support.’ After that, Kurtanidze says, he and Chelidze met on Onashvili Street in Tbilisi, where he was handed a recording device by Chelidze and asked to record the attitudes of policemen and their special sessions.

In his confession, Kurtanidze also says that at the next meeting he gave the recorded material to Chelidze who told him that they were satisfied ‘at the top’, especially Bidzina Ivanishvili, and he received an envelope from Chelidze. Kurtanidze opened the envelope at home and said there was USD 3 000 in it. Zaza Chelidze says in his testimony that he was introduced to Kurtanidze at his wife’s brother’s house and asked to make secret recordings about the situation in the police. He says he gave recordings made by Kurtanidze to Irakli Sesiashvili, a political advisor for Georgian Dream. Sesiashvili asked him to make a copy, then gave him an envelope, which Chelidze later gave to Kurtanidze.

Georgian Dream categorically denies the veracity of the story told by the Interior Ministry. They say the two recorded confessions were produced under duress.

Irakli Sesiashvili says he has known Zaza Chelidze for a long time and that they are friends. The previous day they were planning to go on a holiday together.

“But it turned out that that day employees from the Constitutional Security Department and the Special Operation Department came and took him somewhere, together with his pregnant wife and his brothers. I assume the mentioned recordings were made as a result of pressure against him and his wife,” according to Sesiashvili, a specialist on military issues.

He confirms that he has talked about politics with his friend a number of times and that Zaza Chelidze even told him that ‘many officials express opposition views in private talks.’

“Zaza, as former employee of the National Forensics Bureau at the Justice Ministry, knew many employees of law enforcement bodies and sometimes even told me some policemen even got fed up with government actions and that they also await a change of government,” Sesiashvili says, but categorically denies the accusation that he instructed him to make secret recordings in exchange for money.

“This is a completely absurd and made-up accusation. I appeal to law enforcement bodies to stop the harassment of Zaza Chelidze and his family members in order to obtain fake testimonies. It’s clear that their goal is to conduct a PR campaign against me and the Georgian Dream coalition. So I personally am ready to answer questions from society and law enforcement bodies.”

Bidzina Ivanishvili says he doesn’t have information about the Interior Ministry’s theory, but he doesn’t exclude that it may be a government ploy.

Georgia’s interior ministry frequently makes use of taped confessions, which are usually recorded before the suspect has had a chance to speak to a lawyer, and sometimes aired on national pro-government TV the same day.