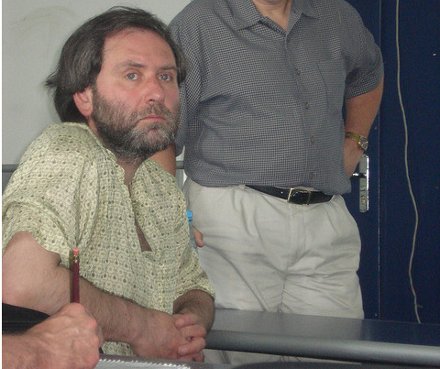 Mamuka Jibladze (54), a skilled computer programmer, went missing June 11 at two o'clock in the afternoon. Then, late Saturday night, he was spotted walking down the street by a surveillance camera, but is still considered missing.

TBILISI, DFWatch – A former employee of the Education Ministry went missing seven days ago. The disappearance happened at 2 o’ clock in the afternoon.

Mamuka Jibladze (54) wrote something called the CAT algorithm for the ministry; a program for translating exam certificates into computer code.

He resigned soon after Georgia’s Education Minister fired the head of the National Examinations Center Maya Miminoshvili. Almost half of her staff resigned in protest, as a show of solidarity with their former boss, including Mamuka Jibladze.

Then, on June 11 he disappeared. He left home that day at about 2:00 p.m. Maya Miminoshvili later told media that they had scheduled meeting on the day of his disappearance.

“We should have met at 2:00 p.m., but he didn’t come,” she says, adding that the day it was possible to call on his phone, but he didn’t answer. Later his cell phone was found at home.

His family says they waited for Jibladze to come home at 5:00 p.m, as he promised.

He should have attended a seminar at Tbilisi State University that day and then had another meeting scheduled, but never appeared.

The Interior Ministry declared him missing and started a search.

The Ministry today told media that surveillance cameras at the Holiday Inn Hotel in Tbilisi provided footage yesterday, June 17, of him walking nearby at 02:00 a.m.

A spokesperson for the Ministry told journalists that they showed the footage to a friend of Jibladze, who said it was him seen in the video.

Employees of the Education Ministry released a statement saying that Jibladze is missing. The statement describes his achievements and says he is a scientist on an international level.

They ask for law enforcement bodies to investigate the case and ask human rights organizations to help his family, friends and co-workers.