Georgia’s Yazidis honour the victims of the Sinjar Massacre

Georgia’s Yazidis honour the victims of the Sinjar Massacre 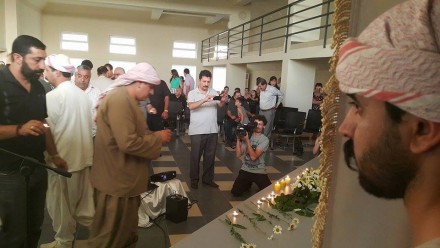 Yezidis of Georgia fathered in a temple in Tbilisi (Facebook)

Georgia’s Yazidi community marked the first anniversary of the Sinjar massacre and prayed for peace in the Yazidi temple in Tbilisi.

Georgia’s Yazidi community gathered on 3 August in the Yazidi temple in the Varketili district of Tbilisi to honour the victims of the Iraqi conflict with a mourning liturgy. Representatives of Georgia’s different religious denominations joined the Yazidi community in a prayer for peace and salvation.

The event included a photo exhibition showing the plight of the Yazidi population, whose lands in northern Iraq were captured by Islamic State and its supporter local militias, resulting in destruction of whole settlements, extermination thousands of male population and enslaving of thousands of women and girls.

The August 3 marks the first anniversary of the Sinjar (Şingal) Massacre during which presumably up to several thousands of Yazidi men were killed and the majority of the local Yazidi population of 50,000 fled and became trapped on Mount Sinjar following the Islamic State’s capture of the city Sinjar. Thousands of Yazidi women were kidnapped and sold on slave markets.

Many Yazidis regard the systematic persecution and killing of Yazidis in Iraq as the constituents of the ‘Yazidi Genocide’ that the nation has been suspected to since 2014 or, in some narratives, for the past 700 years.

Georgia’s Yazidi community has been active in raising awareness of the genocide by means of public demonstrations and online activism.