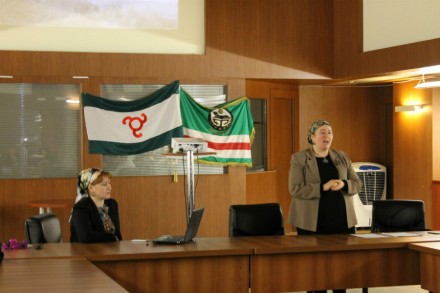 On 23 February, representatives of Georgian Vainakh (Kist, Chechen, and Ingush) communities commemorated the 72nd anniversary of expulsion of the entire population of Chechens and Ingush from their homelands in the North Caucasus to Central Asia.

It is estimated that up to a third of the total Chechen and Ingush populations died during or immediately after the deportation. Survivors were allowed to return to their homeland only four years after Stalin’s death in 1957.

‘It is important to point out that in Georgia this tragic day has been commemorated for past 20–25 years’, Meka Khangoshvili, representative of Chechen diaspora in Georgia and advisor to the minister for reintegration and civic equality said in her opening speech.

‘The Chechen population of Georgia was spared this tragedy, because Georgian authorities insisted that Kists were peaceful citizens of Georgia. These 10 thousand people today faithfully guard the territory of Georgia from Pankisi valley’, Meka Khangoshvili said.

‘The events of 1944 are the most tragic events in the history of the Vainakh peoples. We’re trying not to forget this day and we’re hope for a better future. We want people to know about this pain, so such events never happen again’, Nona Khangoshvili, founder of the Community Union for Pankisi Welfare said.

‘We, Kists, i.e. Chechens and Ingush who live in Georgia commemorate this day, although we weren’t directly affected by this tragedy. It is all due to Georgia’s help. We had Georgian surnames, our Georgian neighbours vouched for us and we were spared deportation. However, we sympathise with our brothers and sisters and we share their pain’, Nona Khangoshvili explained.

During the event, activists screened Chechen film Ordered to forget, which was produced in 2014 and directed by Khuseyn Erkenov. The film depicts the Khaibakh massacre, in which approximately 700 Chechens were burnt alive by Soviet NKVD forces during the deportation process. The Ministry of Culture of Russia banned the screening of the film in Russia.

A parallel event took place in Duisi in Pankisi valley.