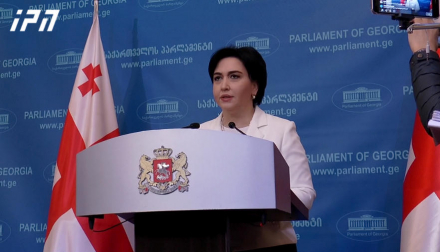 TBILISI, DFWatch–Georgia’s ruling party has lost its constitutional majority after three of its members of parliament left the party on Friday.

Ever since the party seized power from Mikheil Saakashvili’s United National Movement in October 2012, Georgian Dream has controlled at least two thirds of seats in the national assembly – until now. But although numerically losing the seats required to change the constitution, the party still retains a vast majority of seats.

Eka Beselia, the former chair of the parliament’s influential legal committee, has left GD in protest against its policies for appointing judges.

On Friday, the parliament rejected the Bill on Common Courts (with 45 votes against 17), which was introduced by Beselia and envisages the suspension of lifetime tenure of the judges to the Regional (City) and Courts of Appeal till December 31, 2024. For Beselia, the vote was the last straw, as it was for several of her allies. Levan Gogichaishvili left the party on Friday and another MP will soon follow suit.

“I am leaving the political party that I co-founded together with Bidzina Ivanishvili […] I am going to where the absolute majority of the population of Georgia is,” Beselia said.

Beka Natsvlishvili, a leftist MP, also left GD on Friday, but for different reasons. He had said that would do so if the parliament doesn’t adopt his bill to increase pensions. The parliament rejected it, and Natsvlishvili left the party.

All three have been very active GD supporters, while Beselia, a former lawyer, was one of the founders of the party in 2011 along with Bidzina Ivanishvili and several other individuals.

The source of discord was the handling of the judiciary system, an issue that has caused a bitter row within the ranks of GD. The party’s leadership held an extraordinary meeting on Friday evening which lasted for four hours and was personally presided over by Bidzina Ivanishvili.

Some had expected that several more MPs would leave the party or be expelled at the meeting, but those expectations were proven wrong.

The conflict within Georgian Dream ranks has been shaped by the struggle between two influential fractions, “the old guard” and “the newcomers”. Eka Beselia and two other MPs who left the party belong to the former.

The party’s “old guard”, those individuals who actively supported Georgian Dream in is struggle against UNM in 2011 and 2012, is flatly opposing the core figures in the court system, whom they blame for conforming with Saakashvili government during his tenure. They accuse another group of GD MPs, dubbed as “the newcomers”, of collaborating with “corrupt judiciary”. The latter group consist of a dozen of young men and women who hold key offices in the parliament and enjoy unequivocal backing from Bidzina Ivanishvili, the country’s strongman. The speaker of parliament and several chairs of its committees also belong to the group.

The “old guard’s” animosity is strengthened by the fact that they deem “the newcomers” haven’t played such a drastic role in political battles against Saakashvili government, thus don’t deserve the upper hand in politics which they effectively enjoy.

Between these two groups there is a majority of MPs who don’t belong to either camp. However, they tend to side with “the newcomers” whom they see as backed by the sole master of the ruling party, billionaire Ivanishvili.